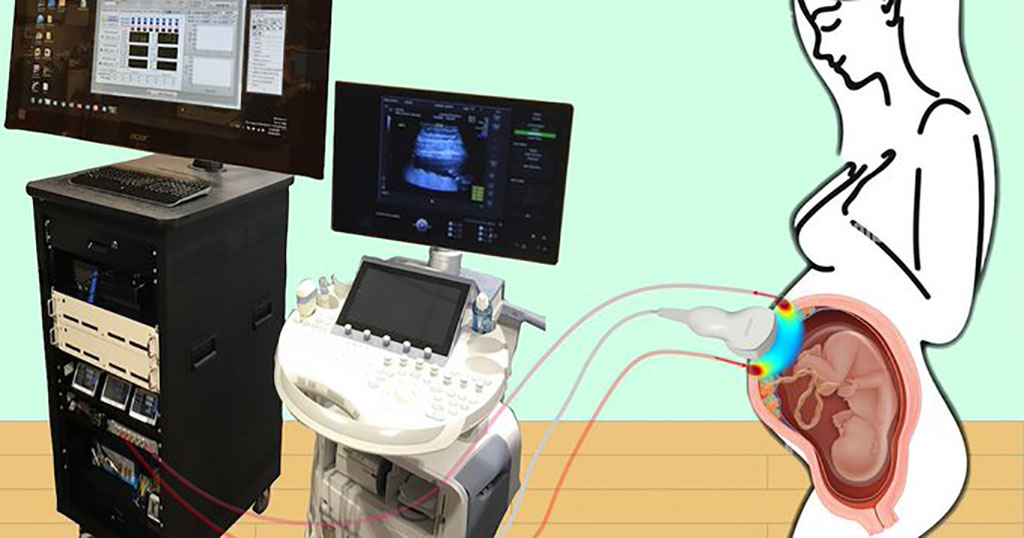 Image: The new device can better measure blood flow and oxygenation in the placenta (Photo courtesy of University of Pennsylvania)

The placenta, considered as the “engine” of pregnancy, is an organ that plays a crucial role in delivering nutrients and oxygen to the fetus. Placental dysfunction can lead to complications such as fetal growth restriction, preeclampsia, and stillbirth. Now, researchers developing tools to assess human placental structure and function in real time, including optical devices, have come up with a novel method for imaging the placenta in pregnant patients. By combining optical measurements with ultrasound, the team has demonstrated how oxygen levels in the placenta can be monitored noninvasively, providing a new way to generate a better understanding of this complex, crucial organ.

For three years, researchers at the University of Pennsylvania (Philadelphia, PA, USA) and the Children’s Hospital of Philadelphia (CHOP, (Philadelphia, PA, USA) optimized the design of their instrument and tested it in preclinical settings. The process involved integrating optical fibers with ultrasound probes, exploring various ultrasound transducers, and improving the multimodal technology so that measurements were stable, accurate, and reproducible while collecting data at the bedside. The resulting instrumentation now enables researchers to study the anatomy of the placenta while also collecting detailed functional information about placenta blood flow and oxygenation, capabilities that existing commercially devices do not have, the researchers say.

Because the placenta is located far below the body’s surface, one of the key technical challenges addressed by the researchers was reducing background noise in the opto-electronic system. Light is scattered and absorbed when it travels through thick tissues, and the key for success was to reduce background interference so that the small amount of light that penetrates deep into the placenta and then returns is still large enough for a high-quality measurement.

In a pilot clinical study conducted by the researchers, 24 pregnant patients in their third trimester were given supplemental oxygen for a short time period, creating placental hyperoxia. Using the device, the team collected measurements of the placenta’s oxygenated and deoxygenated blood concentrations before and during hyperoxia; the results demonstrated that the device could be used to study placental function in real time. The research also provided new insights into the relationship between blood flow and maternal vascular malperfusion, which occurs when blood flow into the placenta is impeded.

While the device is still in development, the researchers are currently refining their instrument to make it more user-friendly and to allow it to collect data faster. The team is also currently working on larger studies, including recently data from patients during their second trimester, and they are also interested in studying different regions of the placenta. And because there are many unanswered clinical questions about the placenta, the biggest potential of this work for the researchers is in providing a way to start answering those questions.

“What was exciting is that, not only did we get an instrument to probe deeper than commercial devices, but we also obtained an early signal that hyperoxygenation experiments can differentiate a healthy placenta from a diseased placenta,” said Nadav Schwartz from the University of Pennsylvania. “Without being able to study the placenta directly, we are relying on very indirect science. This is a tool that helps us study the underlying physiology of pregnancy so we can more strategically study interventions that can help support good pregnancy outcomes.”