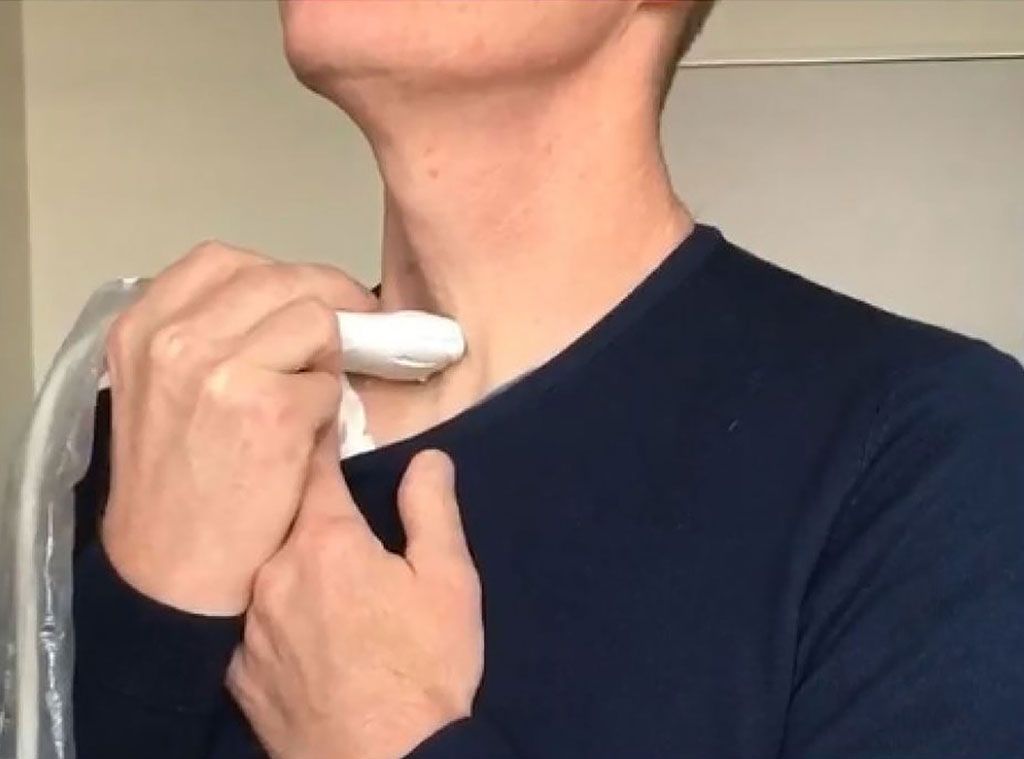 Image: A volunteer sings while holding a linear ultrasound probe to measure VP-E (Photo courtesy of Steve Beuve/ Tours University)
A new study suggests that a shear wave acoustic field generated naturally by the human voice can be used to measure the elasticity of thyroid tissue.

Developed by researchers at Université de Tours (France), Centre Hospitalier Universitaire de Dijon-Bourgogne (France), and Université Bourgogne Franche-Comté (France), vocal passive elastography (V-PE) is designed to measure tissue elasticity from physiological noise generated by body vibrations. In the thyroid, this is mainly due to carotid pulsation, which is in the 1–10 Hz bandwidth and is located right next to the gland. To decrease shear wavelength and increase signal to noise ratio (SNR), a complex shear wave field can be created by using vocal tract vibrations.

The nature of the sound can be modified by changing pitch. Thus, singing and maintain an “eeee” note (approximately the frequency of D3, or 150 hertz), shear wave is generated that can be used to identify abnormally stiff thyroid gland areas that can be indicative of cancer. A correlation-based algorithm then computes a shear wave velocity map that is then super-positioned onto a B-mode ultrasound image of the thyroid, with a pixel resolution of 150 × 150 μm2. The values obtained are in good agreement with comparative shear wave elastography (SWE) ultrasound measurements. The study was published on January 12, 2021, in Applied Physics Letters.

“The singing vibrates the patient's trachea, which in turn produces vibrations throughout the thyroid, allowing the clinician to use an ultrafast frame rate to track changes in shear-wave velocity, giving us information about mechanical properties of soft tissues,” said lead author Steve Beuve, PhD, of the Université de Tours. “Developing noninvasive methods would reduce the stress of patients during their medical exams. Having to sing during a medical exam can perhaps help release some of the nervous tension even more.”

Thyroid nodular disease is one of the most widespread endocrine disorders, but although fine needle aspiration guided with ultrasound examination is commonly used to detect malignant tumors, only 5% of thyroid cancers are detectable with this technique. As a result elastography has been proposed to detect cancerous nodules, with a nodule whose Young's modulus exceeds 65 kPa usually considered suspicious. But one of the problems with such an approach is that the thyroid SNR is drowned out by natural background noise from nearby organs.