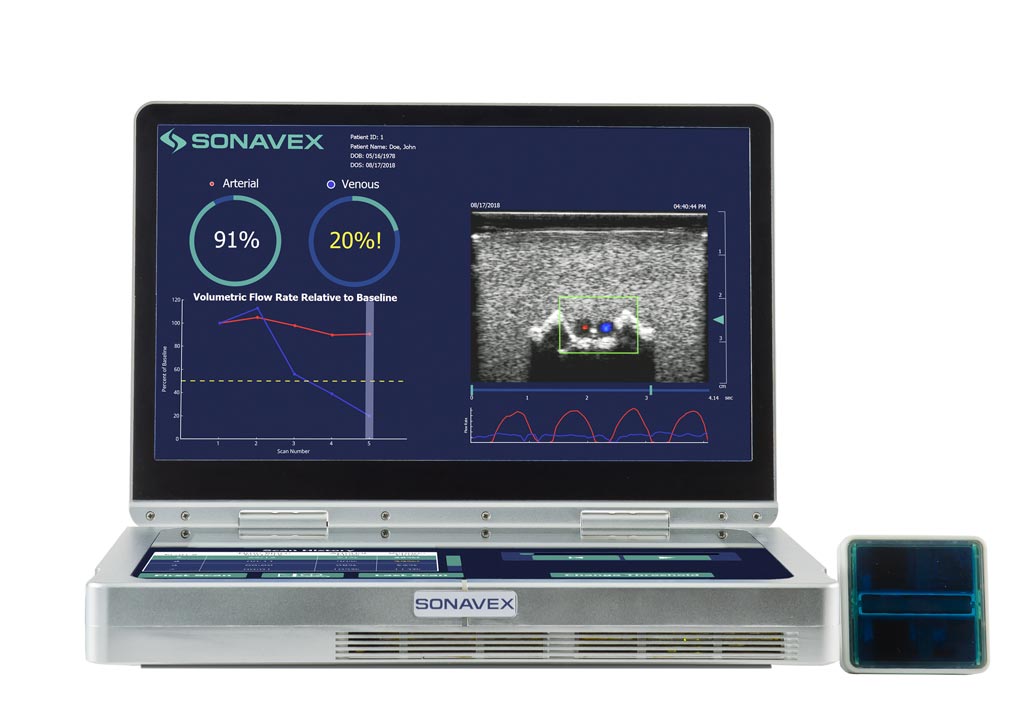 The Sonavex (Baltimore, MD, USA) EchoSure device is a portable ultrasound system designed for non-expert users designed to rapidly detect postoperative clot formation by automatically identifying loss of flow through blood vessels. For example, in the case of reconstructive surgery, it could detect a reduction in blood flow to tissues before symptoms appear. Echosure is designed to work with the EchoMark implant, which serves as a marker for soft tissue sites during surgery. As a result of its ultrasonic reflective properties, doctors can precisely visualized the area during follow-up evaluations.

EchoSure uses deep learning algorithms to derive where the ultrasound beam is coming from, and can then compute the volumetric flow rate through the vessels of interest so it can quantify the blood flow rate over time. In addition to the device itself, there is also a mobile app so that surgeons can monitor their patients remotely. This allows for more frequent monitoring, and more chances for intervention, as surgeons and nurses no longer need a trained sonographer to read the ultrasound and understand the blood flow data.

“The key goal is to be able to detect the problems associated with microvascular and vascular surgeries with high risk of post-op complications. A complication of microvascular surgery is necrosis as a result of reduced blood flow and oxygen,” concluded David Narrow, CEO of Sonavex. “The gold standard for reconstructive surgery is to do a clinical exam of the reconstructive tissue to assess whether it’s starting to get colder, or bluer, or starting to appear to be in its early stages of necrosis. It’s basically waiting for the tissue to be almost dead to tell if there is a problem.”

Doppler ultrasound can detect moving cells or structures and measure their direction and speed of movement based on the Doppler effect, which evaluates movement by measuring changes in frequency of the echoes reflected. In many instances, Doppler ultrasound has replaced x-ray angiography, as it permits real-time viewing of blood flow that cannot be obtained by other methods.