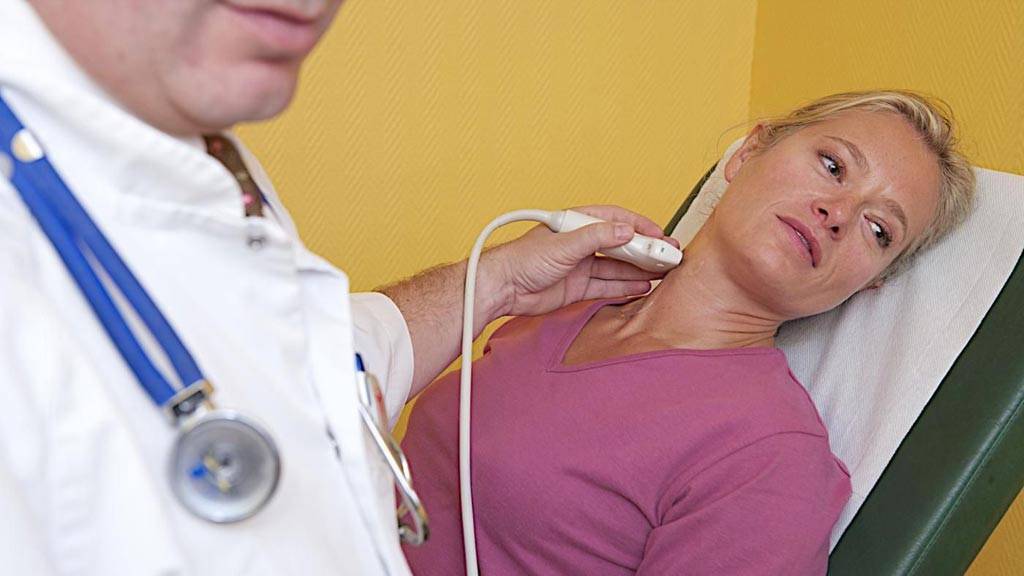 Image: A new study claims that showing people what their atherosclerotic carotid artery looks like improves prevention (Photo courtesy of Getty Images).
Sharing personalized ultrasound scans that reveal the extent of atherosclerosis leads to a decreased risk of cardiovascular disease (CVD), according to a new study.

Researchers at Umeå University (Sweden) conducted a study to examine if ultrasound-based pictorial information on subclinical carotid atherosclerosis, targeting both primary care physicians and patients, could improve prevention. The open-label, randomized trial enrolled 3,532 individuals between April 29, 2013, and June 7, 2016, of which 1,749 were randomly assigned to the study cohort, and 1,783 were randomly assigned to an uninformed control group. All participants underwent blood sampling, a survey of clinical risk factors, and ultrasound assessment for carotid intima media wall thickness and plaque formation.

The study cohort participants received a pictorial representation of their carotid plaque formation, and a gauge ranging from green to red to illustrate their biological age compared with their chronological age. They also received a follow up call from a nurse 2-4 weeks later to answer any questions; the pictorial presentation was also sent to their primary care doctor. Both groups received information about their cardiovascular risk factors and a motivational health dialogue to promote healthier life style and, if needed according to clinical guidelines, pharmacological treatment.

The primary outcomes, which included Framingham risk score (FRS) and European systematic coronary risk evaluation (SCORE), were assessed after one year, which differed significantly between groups. FRS decreased from baseline to the one-year follow-up in the study group, but increased in the control group. SCORE, on the other hand, increased by twice as much in control group compared to the intervention group. The effect of the intervention did not differ by education level. The study was published on December 3, 2018, in The Lancet.

“Our approach integrated an ultrasound scan and a follow up call with a nurse into an already established screening program, meaning our findings are highly relevant to clinical practice,” said lead author Professor Ulf Näslund, PhD, of Umeå University. “Imaging technologies such as CT and MRI might allow for a more precise assessment of risk, but these technologies have a higher cost and are not available on an equitable basis for the entire population.”

“Cardiovascular disease is the leading cause of death in many countries, and despite a wealth of evidence about effective prevention methods from medication to lifestyle changes, adherence is low,” concluded Professor Näslund. “Information alone rarely leads to behavior change, and the recall of advice regarding exercise and diet is poorer than advice about medicines. This trial shows the power of using personalized images of atherosclerosis as a tool to potentially prompt behavior change and reduce the risk of cardiovascular disease.”