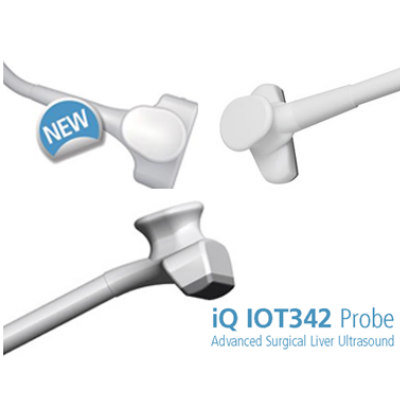 The robotic cell, developed in a collaboration between Esaote (Genova, Italy) and The BioRobotics Institute of Scuola Superiore Sant’Anna (Pontedera, Italy), consists of a collaborative robot arm from Universal Robots (Odense, Denmark) and a Schunk gripper equipped with custom fingers that with the aid of a human operator, can verify correct probe positioning during testing. To increase reproducibility and repeatability during testing, the robotic cell automates the process.

Users thus have more precise data, including the most important, characterizing measurement of an ultrasound probe, the pulse echo measurement. The pulse echo measurement from each single array element, which identifies waveform, bandshape quality, and amplitude, consists in simply receiving an ultrasound pulse sent into a water tank from the probe itself and reflected from a metallic target. Probe performance parameters that can be analyzed include image quality (SNR), maximum diagnostic depth, operational frequencies, and many others.

With the human operator working alongside the robot, without the need of external technologies, the human can perform all the highly precise manipulation tasks, by visually monitoring the process and easily interacting with the robot. All the repetitive tasks, covering actions requiring a low level of know-how, are demanded to the robot, increasing the productivity of the process. The robotic cell can thus make it possible to execute precise probe positioning in the water tank, in terms of spatial resolution for all the degrees of freedom used for probe alignment during the test.

“The robotic cell has reached two goals; the first is to automate the procedure for the operation of the tests; the second is to keep in the foreground the role of man. Esaote operators will interact with the robot, supporting it during the tests,” said Marco Controzzi, of The BioRobotics Institute. “This line of research reflects the mission of ‘Human-Robot-Interaction’, the laboratory of collaborative robotics of The BioRobotics Institute. We imagine a synergy between men and robots, combining the advantages of manual production with precision and repeatability of automation.”

An ultrasound transducer typically consists of 128-512 piezoelectric elements that are arranged in linear or curvilinear arrays, with each element equal to or less than a ½ wavelength wide. The purpose of the transducer is to convert electrical energy into mechanical sonic energy and back again, based on the piezoelectric effect. A standard ultrasound transducer is comprised of a piezoelectric ceramic, a hard rubber backing substrate, several (usually one to four) acoustic matching layers, and a silicon rubber lens.