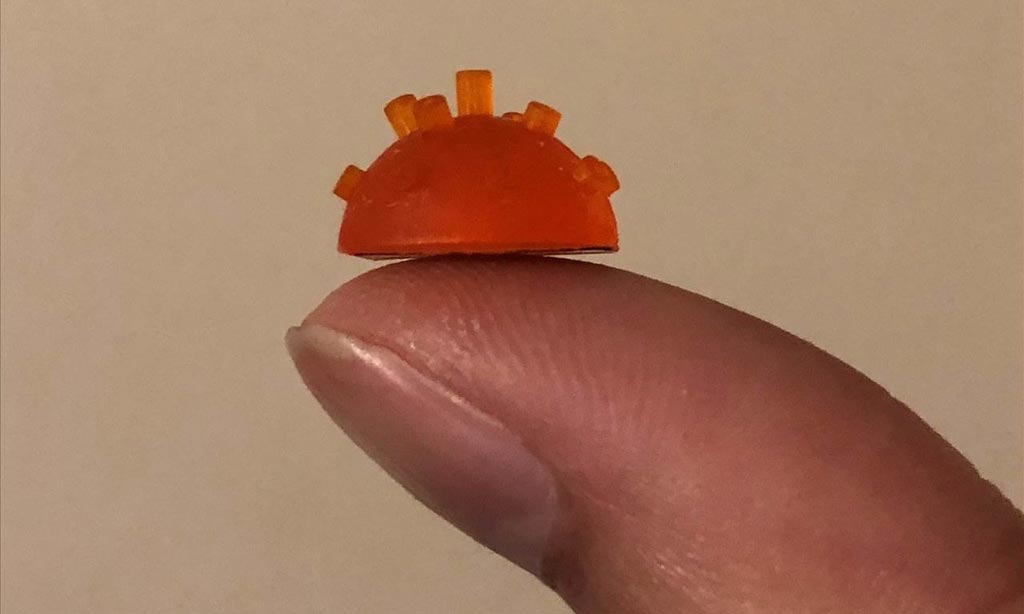 Researchers at the University of Strathclyde (United Kingdom) have developed a piezoelectric micromachined ultrasonic transducer (PMUT) modification that consists of a polyvinylidene fluoride thin film over a stereolithography designed backplate. The design was inspired by a pipe organ, where the resonant frequency of each pipe is mainly determined by its length. The -6-dB bandwidth of the coupled PMUT is 55.7% and 58.5% in transmitting and receiving modes, respectively, about five times wider than a custom-built standard device.

The designs were developed and tested using mathematical models and computer simulations to speed up the process, and were printed using three-dimensional (3D) additive manufacturing techniques. The researchers added that while development is at an early stage, the technology could have significant implications in the design of hearing aids, in underwater sonar, and in nondestructive evaluation (NDE) of safety critical structures such as nuclear plants. The study was published in the October 2018 issue of IEEE Transactions on Ultrasonics, Ferroelectrics, and Frequency Control.

“Musical instruments have a wide variety of designs, but they all have one thing in common; they emit sound across a broad range of frequencies. So there is a treasure trove of design ideas for future medical imaging sensors lying waiting to be discovered amongst this vast array of designs,” said study co-author Professor Tony Mulholland, PhD. “Ultrasound scanners operates at a single frequency, and this accounts in part for the relatively poor resolution that one sees. If we had a scanner that could emit waves across a broad range of frequencies, this would provide a marked improvement in the imaging capability.”

“Musical instruments create sounds over a broad range of frequencies and have been carefully designed over the centuries to be very efficient at doing so. It is well known that the highest frequency pipes are the smallest in length, as in, for example, a piccolo. So to realize frequencies that are beyond human hearing, ultrasound waves, the length has to be very small indeed, of millimeters in length,” said senior author Professor James Windmill, PhD, of the Centre for Ultrasonic Engineering. “This would be extremely difficult to construct using traditional manufacturing techniques, such as those used to build musical instruments. Using high resolution 3D printers allows us to try new designs with much faster development cycles.”

Whereas standard ceramic piezoelectric transducers use thickness mode resonances, PMUTs have a thin flexible film to transmit and receive ultrasound waves, and have a better performance in air because the flexible film is easier to couple with the media, with a more closely matched mechanical impedance. And as the film stores much less kinetic energy than bulk piezoceramic, PMUTs have larger bandwidths when in resonance. The deflection of the PMUT membrane is caused by lateral strain of its piezoelectric layer.