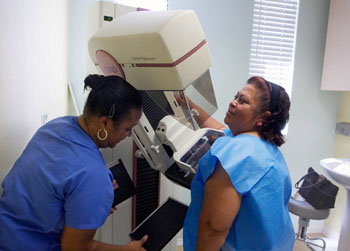 Image: A screen-film mammography exam in progress in a cancer detection center (Photo courtesy of AP/Damian Dovarganes).
Researchers in the Netherlands are developing an alternative breast cancer screening method that can identify tumors by the blood vessels surrounding it.

Mammograms are commonly used in many countries for the early detection of breast cancer, but the procedure is often unpleasant, and uses X-Rays that can themselves cause cancer. In addition, most of the findings are false-positives, and findings are not actually cancerous.

The new technique that generates 3D images is being developed by researchers at the Technical University Eindhoven (TU/e; Eindhoven, the Netherlands). The proof of concept research study results was published in the October 2016 online issue of the journal Scientific Reports.

The new technology involves a patient lying on a table, with their breast hanging freely in a bowl. The clinician then uses echography to create a 3D image of the breast. The technique uses dynamic contrast specific ultrasound tomography to reveal the microvessels associated with tumors. The researchers are currently assembling an international medical team to begin preclinical studies of the new technique.

A similar technique, also developed at the TU/e, is already being used for radiation-free detection of prostate cancer. The method involves a clinician injecting harmless microbubbles into a patient, followed by imaging using an echoscanner to precisely monitor the microbubbles as they move through the blood vessels of the prostate gland. The technique reveals the network of chaotic microvessels that surround a tumor.