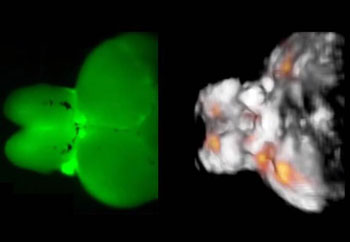 Image: Typical images acquired from an adult zebrafish brain – a fluorescence image on the left, and a functional optoacoustic tomography image on the right (Photo courtesy of Helmholtz Zentrum München).
A new real-time imaging technique is enabling neuroscientists to observe the activation of large neural circuits in 3D in the brains of zebrafish (Danio rerio).

The researchers described the technique and their findings in a manuscript preview in August 2016, before advanced online publication in the journal Nature, Light: Science & Applications.

The researchers from the Helmholtz Zentrum (Munich, Germany) and the Technical University of Munich (TUM; Munich, Germany) monitored millions of neurons in the brains of adult zebrafish, using a new non-invasive technique based on optoacoustics. Optoacoustics uses short laser pulses to cause short-term expansion of tissue that leads to very small ultrasound vibrations that are detected, registered, processed and converted into 3D images. The researchers showed that it was fundamentally possible to track neural dynamics and neural activity in the brain of the zebrafish directly even during unrestrained motion of the zebrafish.

Study leader Razansky, said, "Thanks to our method, one can now capture fast activity of millions of neurons simultaneously. Parallel neural networks with the social media: in the past, we were able to read along when someone (in this case, a nerve cell) placed a message with a neighbor. Now we can also see how this message spreads like wildfire. This new imaging tool is expected not only to significantly promote our knowledge on brain function and its pathophysiology but also accelerate development of novel therapies targeting neurological and neuropsychiatric disorders."