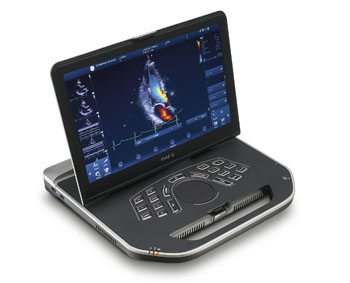 The commercial launch of the system was announced at the European Society of Cardiology Congress, in Rome Italy. The new generation portable compact cardiovascular ultrasound system weighs 4.5 kg and boasts improved image quality, and additional functionality than previous systems.

The new ultrasound system, named Vivid iq, was announced by GE Healthcare (Chalfont St Giles, Buckinghamshire, UK) and is intended for cardiac care in Cath laboratories, operating and emergency rooms, or for use in remote locations that are difficult to access.

According to GE Healthcare, this is their most advanced portable cardiovascular ultrasound. The system was developed in cooperation with cardiologists, interventional cardiologists, and international healthcare providers.

The Vivid iq is 10% lighter and thinner the Vivid q, and has a new transportable cart, and a battery life of up to one hour. The system has a cleanable design and has a rugged build for use in difficult conditions. Other new features include a touch screen, and 4D Trans-Esophageal Echocardiography (TEE).