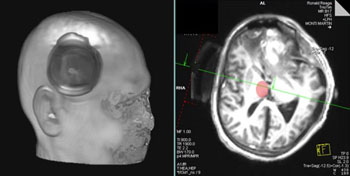 Image: A 3D reconstruction of patient’s head with transducer (L); axial view of the transducer and approximate thalamic target (R) (Photo courtesy of Martin Monti/ UCLA).
Ultrasonic stimulation in order to excite the neurons in the thalamus could be used to treat severe brain injury, according to a new study.

Researchers at the University of California, Los Angeles (UCLA; USA) used a low-intensity focused ultrasound pulsation technique in order to stimulate the brain of a 25-year-old man recovering from a coma. The ultrasonic pulsations were delivered using a small transducer to create a small sphere of acoustic energy that was aimed at the thalamus region to excite brain tissue. The researchers placed the transducer at the side of the man's head, and activated it 10 times for 30 seconds each during a 10-minute period.

The researchers reported that before the procedure began, the man showed only minimal signs of being conscious and of understanding speech, performing only small, limited movements when asked. But by the next day, his responses had improved measurably; three days later, the patient had regained full consciousness and full language comprehension, and could reliably communicate by nodding or shaking his head and making hand gestures. The study was published on July 22, 2016, in Brain Stimulation.

“The changes were remarkable. It's almost as if we were jump-starting the neurons back into function,” said lead author Martin Monti, MD, PhD, a UCLA associate professor of psychology and neurosurgery. “Until now, the only way to achieve this was a risky surgical procedure known as deep brain stimulation, in which electrodes are implanted directly inside the thalamus. Our approach directly targets the thalamus but is noninvasive.”

The thalamus is a midline egg-shaped symmetrical structure within the vertebrate brain, situated between the cerebral cortex and the midbrain. It serves as the brain's central hub for processing information, relaying sensory and motor signals to the cerebral cortex, and participating in the regulation of consciousness, sleep, and alertness. The new technique targets the thalamus, since people whose mental function has been deeply impaired after a coma show diminished thalamus performance.