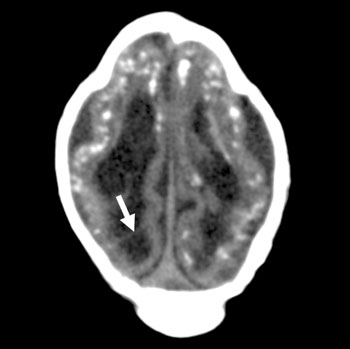 Image: The image displays an axial CT scan of a 1-month-old male with a presumed Zika virus infection, and shows ventriculomegaly with septation, calcifications, an abnormally diffused gyral pattern, and a deformed skull (Photo courtesy of RSNA).
Researchers in Brazil have released imaging findings of the effects of the Zika virus on babies and fetuses infected with the virus.

The researchers used Computed Tomography (CT), Magnetic Resonance Imaging (MRI), and ultrasound imaging to investigate the wide array of effects on the brain, including microcephaly.

The report was published in the August 2016 issue of the journal Radiology. The researchers used imaging and autopsy findings from babies and fetuses affected by the congenital Zika virus infection, and treated at the Northeast Brazilian Instituto de Pesquisa in Campina Grande state Paraiba (IPESQ). The researchers performed a retrospective review of the CT, MRI, and ultrasound images collected between June 2015 and May 2016. The researchers used images and related data of 17 fetuses or neonates of women who had been scanned at IPESQ, and 28 other fetuses or neonates with brain findings that were suspicious for Zika infections.

The researchers found various brain abnormalities in fetuses exposed to the Zika virus, besides microcephaly. These included loss of volume in the gray matter and white matter of the brain, abnormalities of the brainstem, ventriculomegaly, and calcifications.

Lead author of the report, Fernanda Tovar-Moll, MD, PhD, said, "Imaging is essential for identifying the presence and the severity of the structural changes induced by the infection, especially in the central nervous system. Microcephaly is just one of several radiological features. The severity of the cortical malformation and associated tissue changes, and the localization of the calcifications at the grey-white matter junction were the most surprising findings in our research. More than one ultrasound or MRI scan in pregnancy may be needed to assess the growth and development abnormalities of the brain. We are also interested in investigating how congenital Zika virus infection can interfere with not only prenatal, but also postnatal gray and white brain maturation."