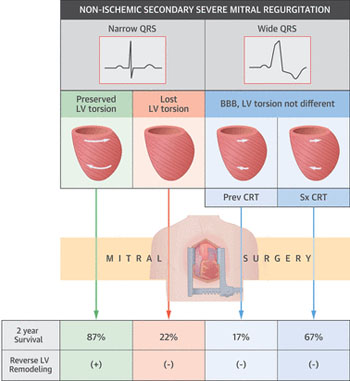 Image: A summary of the study (Photo courtesy of Yuichi Notomi / Hayama).
A new study suggests that a simple pre-operative echocardiographic assessment of left ventricular (LV) torsion could predict the outcomes of mitral valve surgery.

Two years after surgery, 19 of the patients had died. The researchers found that LV torsional profile predicted post-surgical outcomes in NICSMR patients with a narrow QRS band, but not in those with a wide QRS band. Patients who received CRT prior to mitral surgery showed significantly worse two-year survival than those who received the procedure during mitral surgery. However, the two groups had similar LV torsion. The study was published on June 27, 2016, in JACC: Basic to Translational Science.

“Mechanistically, this study suggests that the loss of torsion in patients with heart failure may reflect irreversible structural damage to the heart which would prevent the heart from recovering after corrective surgery,” said Douglas Mann, MD, editor-in-chief of JACC: Basic to Translational Science. “If correct, this will have much broader implications than improvement after mitral valve surgery, since it may predict which patients with heart failure may get better on medications.”