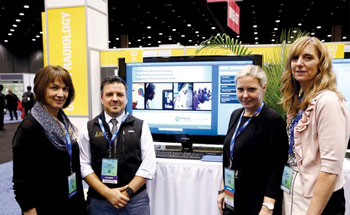 Poor communities in the world lack the resources and trained personnel for obstetrical care, and this can result in undiagnosed complications during pregnancy, and increased neonatal, infant, and maternal mortality. The new technology is portable, and relatively inexpensive, and can be taught to people with no previous ultrasound experience, within several hours, and the results sent to an obstetrical expert for evaluation over an Internet connection.

Results for 91 patients examined using the new technique were compared to results from routine obstetric ultrasound exams performed on the same patients, on the same day. The researchers found that the ultrasound exams were useful in finding multiple pregnancies, and fetuses in breech positions. The researchers were also able to use the scans from more than 73% of the minimally trained people to estimate gestational age by measuring the Biparietal Diameter (BPD). The scans could also be used to evaluate for Intrauterine Growth Restriction (IUGR), and preeclampsia.

According to the researchers the technology could also be useful in imaging pediatric patients for abdominal emergencies, to find evidence of heart disease in pregnant women, evaluating breast lumps, and has a significant potential for emergency imaging following natural disasters.

The author of the study, Kristen K. DeStigter, MD, University of Vermont College of Medicine (Vermont, Burlington, VT, USA), said, "At first we were compressing and transmitting the sweeps for quality assurance purposes, but when we saw that the images were quite good we started to wonder whether it was possible to use the sweeps for primary interpretation to identify complications early in pregnancy. If so, then this method could be a game changer for rural areas where skilled human resources are scarce. It's important to know the gestational age and, if necessary, get the mother to a higher level of care. If the mother has a condition like diabetes or high blood pressure, we can treat her condition and improve the chances of a successful pregnancy."

University of Vermont College of Medicine