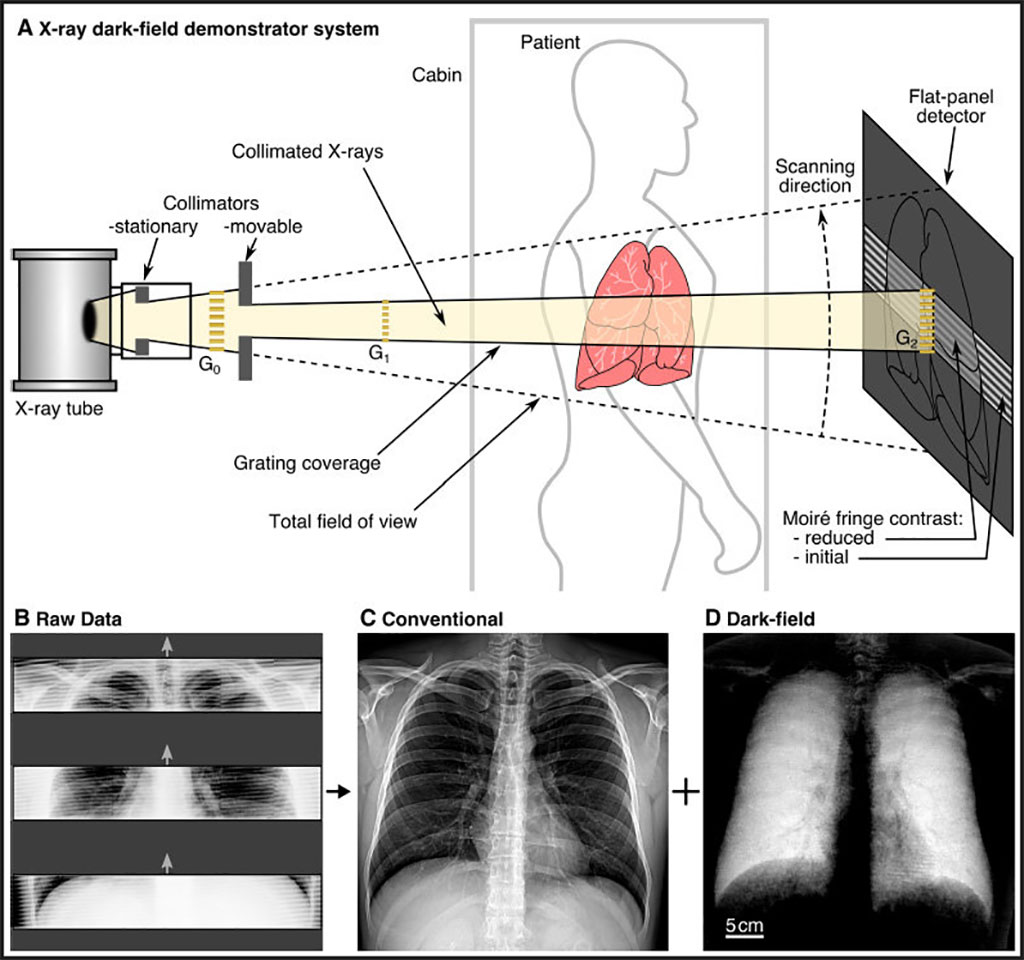 Image: Schematic of the prototype dark-field X-ray system (Photo courtesy of Radiology)
A new chest x-ray imaging technique can detect signals in the lungs that are undetected in standard chest x-rays, claims a new study.

Under investigation by researchers at Munich Technical University (TUM; Germany), Klinikum rechts der Isar (Munich, Germany), and Philips Research (Hamburg, Germany), x-ray dark-field imaging, unlike attenuation-based conventional radiography, utilizes the wave properties of x-rays, specifically the ultra-small-angle scattering that occurs at the material interface within the specimen. In analogy to dark-field light microscopy, dark field in this context refers to the bright appearance of scattering objects on a dark background.

Since the contrast is generated by multiple refractions on microstructures, healthy lungs have a relatively high signal due to their many air-tissue interfaces in the alveoli. Lung diseases interfering with the integrity of the alveolar structure, such as emphysema, fibrosis, and lung cancer, lead to a decrease in the dark-field signal. The researchers have developed a prototype system for humans that can be used to evaluate dark-field imaging for detection and characterization of lung diseases, with a comparably low amount of radiation exposure for the subject.

For the study, the researchers enlisted 40 healthy patients who underwent chest CT as part of their diagnostic workup, as well attenuation-based and dark-field chest radiographs simultaneously. The researchers found a correlation between total dark-field signal and the lung volume, with normal human lungs on dark-field chest x-ray imaging produced high signal, while the surrounding osseous structures had a low signal, and soft tissue produced no signal at all. In addition, no differences were found between men and women and age, weight, and height did not influence the dark-field signal. The study was published on August 24, 2021, in Radiology.

“Because of the nature of signal generation in dark-field imaging, bone structures and soft tissue generate only a minimal dark-field signal compared with lung tissue. This feature allows for a detailed depiction of lung tissue without impairment by surrounding structures,” concluded lead author Florian Gassert, PhD, of TUM, and colleagues. “These findings prove that the dark-field signal is indeed sensitive to the subject's lung condition alone and is independent from demographic factors, highlighting its potential value for diagnosis and monitoring of respiratory diseases.”