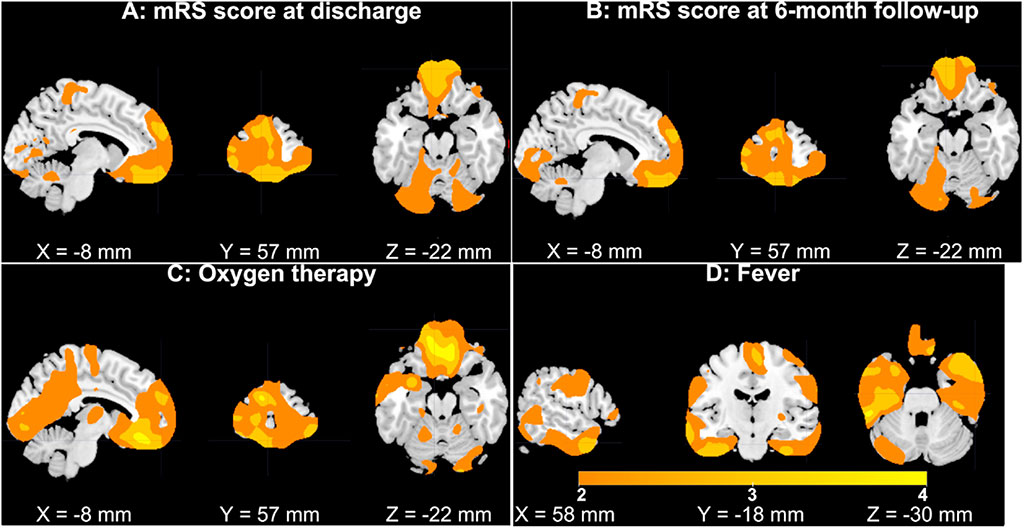 Image: Subplots of GMV in superior/medial/middle frontal gyri (Photo courtesy of Georgia Institute of Technology)
A new computed tomography (CT) study reveals that some COVID-19 patients have reduced gray-matter volume (GMV) in the frontal-temporal lobe of the brain.

The results showed lower GMV in superior/medial/middle frontal gyri that was significantly associated with a higher level of disability at both discharge and at six months follow-up, even when controlling for cerebrovascular diseases (CVD). GMV in the frontal gyri was significantly reduced in patients receiving oxygen therapy and in patients with agitation, compared to patients not receiving oxygen therapy. Patients with fever also presented significant GMV reduction in inferior/middle temporal gyri and the fusiform gyrus compared to patients without fever.

Conversely, patients with COVID-19 showed no significant GMV differences when compared to patients without COVID-19 in any brain region. According to the researchers, this suggests that COVID-19 may affect the frontal-temporal network in a secondary manner through fever or lack of oxygen, and that the gray-matter changes in the frontal region may also underlie the mood disturbances commonly exhibited by COVID-19 patients. The study was published on May 11, 2021, in Neurobiology of Stress.

“People with higher levels of disability at discharge from the hospital and six months later had reduced gray-matter volume in the superior, medial, and middle frontal gyri,” said lead author Kuaikuai Duan, PhD, of Georgia Tech, and colleagues. “Science has shown that the brain's structure affects its function, and abnormal brain imaging has emerged as a major feature of COVID-19. The frontal-temporal network could potentially be employed as a biomarker for prognosis and evaluation of treatment of COVID-19.”

Grey matter is an important component of the central nervous system (CNS), consisting of neuron cells, dendrites, unmyelinated axons, glial cells (such as astrocytes and oligodendrocytes), synapses, and capillaries. It is distinguished from white matter in that it contains numerous cell bodies and relatively few myelinated axons, while white matter contains relatively few cell bodies and is composed chiefly of long-range myelinated axons. The color difference arises mainly from the whiteness of myelin.