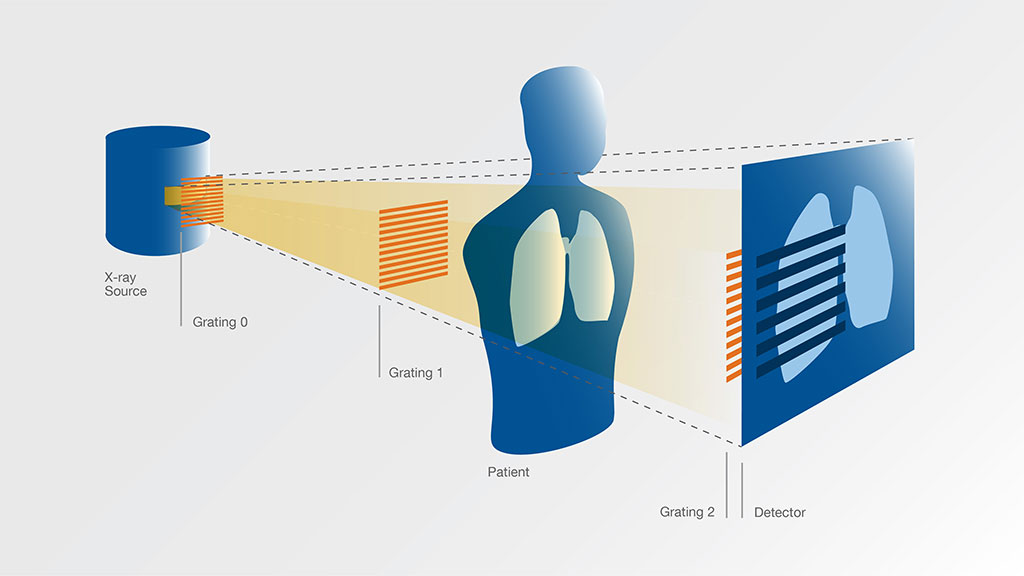 Developed at Munich Technical University (TUM; Germany), dark-field imaging visualizes x-ray scattering. While conventional x-ray imaging shows the attenuation of x-rays on their way through tissue, the dark-field method focuses on the small share of the x-ray light which is scattered, similar to long-established dark-field microscopy technologies using visible light. To do so, x-ray dark-field imaging uses gratings as optical elements; the gratings are arrangements of fine lines which alternate between different degrees of x-ray transparency.

A total of three gratings used. Because of the short wavelength of the x-rays, the lines of the gratings are only a few micrometers (thousandths of a millimeter) wide. The patient is located between the second and third grating. The x-ray detector receives a conventional x-ray image which is overlaid with a pattern of fringes. The fringe pattern is the weakest in the areas where regions with intact alveoli are visualized. Specialized software then reconstructs two separate images, a conventional x-ray image and a dark-field image in which areas with intact alveoli appear bright, and areas with damaged alveoli appear dark.

“In pneumonia of the type caused by Covid-19, structures form in the lung which initially resemble cotton wadding or spider webs, and which then spread throughout the lung and fill with fluid. The changes in the lung are associated with damage to the alveoli which could be clearly visible in dark-field images,” said Professor Franz Pfeiffer, PhD. “The scattering is particularly strong at interfaces between air and tissue. As a result, a dark-field image of the lung can clearly distinguish areas with alveoli that are intact, i.e. filled with air, from regions in which the alveoli have collapsed or are filled with fluid.”

X-ray methods can be used to identify pathological changes in the lung that can typically accompany Covid-19, but the changes caused cannot be clearly identified in a conventional two-dimensional x-ray image, and require CT. Dark-field technology would involve exposure to a significantly lower radiation dose, as it requires only a single image per patient, while CT requires a large number of individual images taken from various angles. It would also make it possible to examine large numbers of patients within a very short time, providing results immediately after the examination.