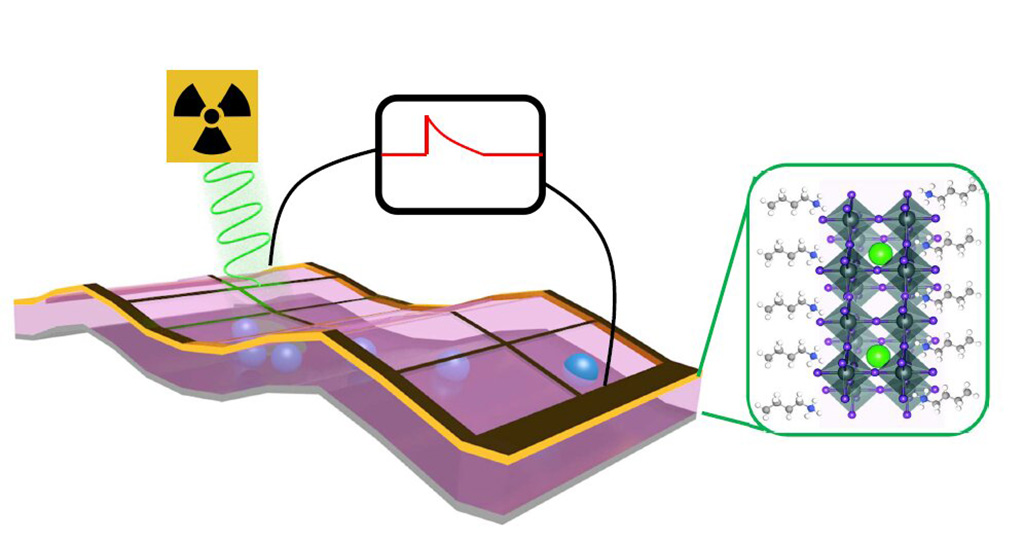 Image: Schematic of a perovskite thin film X-ray photon detector (Photo courtesy of Los Alamos National Laboratory)
A new generation of x-ray detectors based on a thin film of the mineral perovskite could transform future x-ray imaging technologies, according to a new study.

Developed at Los Alamos National Laboratory (LANL; NM, USA) and Argonne National Laboratory (ANL; Lemont, IL, USA), the thin-film x-ray detectors are comprised of highly crystalline, Ruddlesden-Popper phase layered perovskites that are over a hundred times more sensitive than conventional silicon-based detectors. Also, as the perovskite detectors are photocurrent devices, they do not require an outside power source to operate; instead, they work by generating substantial x-ray photon–induced open-circuit voltages in response to bombardment by X-ray beams.

The Perovskite films can be deposited on surfaces by spraying solutions that cure and leave thin layers of the material behind. As a result, the thin-layer detectors will be much easier and cheaper to produce than silicon-based detectors, which require high-temperature metal deposition under strict vacuum conditions. The lower-energy, increased-resolution detectors could also revolutionize security scanners and imaging in high-energy research facilities, for example those that use synchrotron light sources. The study was published on April 10, 2020, in Science Advances.

“The perovskite material at the heart of our detector prototype can be produced with low-cost fabrication techniques. Potentially, we could use ink-jet types of systems to print large scale detectors,” said lead author Hsinhan (Dave) Tsai, PhD, of the LANL department of materials physics and applications. “The result is a cost-effective, highly sensitive, and self-powered detector that could radically improve existing X-ray detectors, and potentially lead to a host of unforeseen applications.”

Perovskite, named after Russian mineralogist Lev Perovski (1792–1856), is a mineral that was discovered in the Ural Mountains by Gustav Rose in 1839. It is composed mainly of calcium titanate, and is rich in heavy elements, such as lead and iodine. As a result, X-rays that easily pass through silicon undetected are more readily absorbed, and detected, in perovskite.