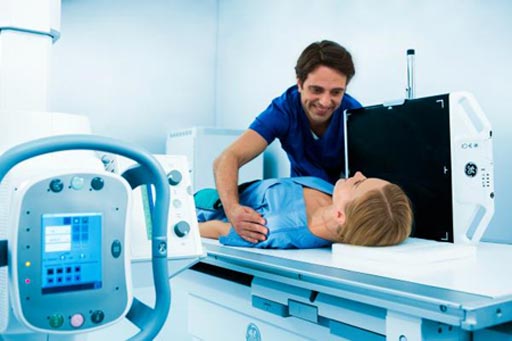 Image: New research shows diagnostic imaging radiation may not promote cancer (Photo courtesy of ITN).
The long-held belief that even low doses of radiation, such as those received in diagnostic imaging, increase cancer risk is based on an inaccurate, 70-year-old hypothesis, according to a new study.

Researchers at Nuclear Physics Enterprises (Marlton, NJ, USA) and the U.S. Food and Drug Administration argue that the claim that radiologic imaging carries an iatrogenic risk of cancer is based on an uninformed commitment to the 70-year-old linear no-threshold hypothesis (LNTH). The argument asserts that LNTH and its offspring, the low as reasonably achievable (ALARA) theory, are fatally flawed, focusing only on molecular damage while ignoring protective, organismal biologic responses.

The researchers show that credible evidence of imaging-related low-dose (i.e., lower than 100 mGy) carcinogenic risk is nonexistent, and it is a hypothetical risk derived from the demonstrably false LNTH. On the contrary, they claim, low doses of radiation stimulate protective responses, providing enhanced protection against additional damage over time, including damage from subsequent, higher radiation exposures. In essence, low-dose radiation does not cause, but more likely helps prevent cancer. The study was published in the January 2017 issue of The Journal of Nuclear Medicine.

“We have shown that the claim made by Hermann Muller during his 1946 Nobel Lecture that all radiation is harmful, regardless of how low the dose and dose rate was a non-sequitur unrecognized by the radiation science community,” said lead author Jeffry Siegel, PhD, president and CEO of Nuclear Physics Enterprises. “It has repeatedly been shown that the dose-response relationship may reasonably be considered to be linear but only down to a threshold, below which there is no demonstrable harm and even often benefit. Yet, the LNTH still rules radiation regulatory policy.”

“The task before us is to undo the public’s groundless fears of low-dose radiation exposure. The medical profession must be properly re-educated, beginning with diagnostic radiologists and nuclear medicine physicians, and only then can the public be given valid information that they can trust,” concluded Dr. Siegel. “Furthermore, defeating the LNTH and its offspring ALARA may lead to new ways of diagnosing and treating illness, and, even more importantly, preventing it.”

Data from the atomic-bomb survivor life span study (LSS) show the LNTH-predicted, low-dose carcinogenicity is invalid below approximately 200 mGy. The effective dose of a typical computed tomography (CT) scan is about 10 mSv; a positron emission tomography (PET) brain scan, 5-7 mSv; and a routine whole-body F-18 FDG PET/CT scan, 12-15 mSv. The researchers therefore feel confident that medical imaging's much lower doses for children or adults should not be feared or avoided for radio-phobic reasons.