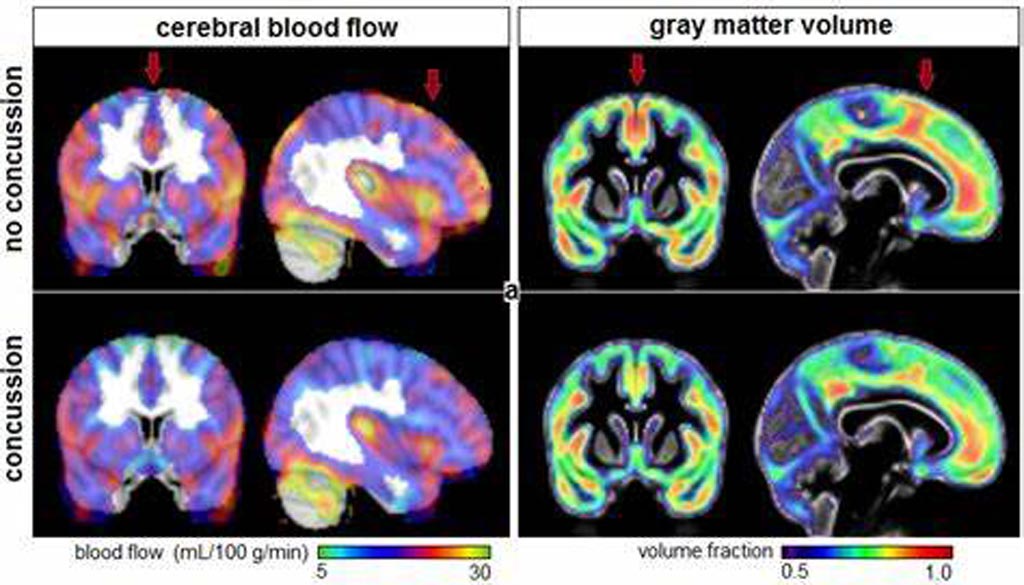 Image: CBF (L) and gray-matter volume fraction (R) for athletes with and without a history of concussion (Photo courtesy Nathan Churchill / St. Michael\'s Hospital).
A new study based on magnetic resonance imaging (MRI) scans reveal some brain abnormalities linger for over a year following concussion.

The initial MRI scans were performed on average four days after the trauma, with follow-up scans undertaken when the athletes were cleared to return to the field, and again one year after that return. Each scan gathered information on global functional connectivity (GFC), cerebral blood flow (CBF), grey matter volume (GMV), white-matter fractional anisotropy (FA), and mean diffusivity (MD). The results revealed that different aspects of brain physiology showed different patterns of recovery over time. Both GFC and FA displayed no significant effects one year after return to play, whereas CBF and MD exhibited persistent long-term effects.

The effects of concussion on MRI parameters were also dependent on acute symptom severity and time to return to play for all post-injury time points. At return to play, fMRI and CBF were normal, and FA showed normal water molecule flow in the white matter. However, one year later significantly reduced CBF was shown, with average decrease of 10 mL/100 g of blood per minute. MRI also showed increasing significant elevations in MD, primarily in posterior and superior corona radiata of the concussed area, which may indicate edema. The study was published on October 16, 2019, in Neurology.

“Despite concussion being conventionally described as a transient disturbance in brain function, there is growing evidence that neurobiological recovery may be incomplete at return to play,” concluded lead author Nathan Churchill, PhD, of St. Michael's Hospital and UT. “The MRI measures also showed an association between the clinical severity of the concussion and the recovery timeline, reinforcing that neurobiological recovery may be highly variable across individuals, and partly dependent on initial clinical presentation.”

A concussion is the most common and least serious type of a mild traumatic brain injury (TBI). The word comes from the Latin concutere, which means “to shake violently.” The effects are usually temporary, and can include headaches, confusion, amnesia, problematic balance and coordination, and sometimes loss of consciousness.