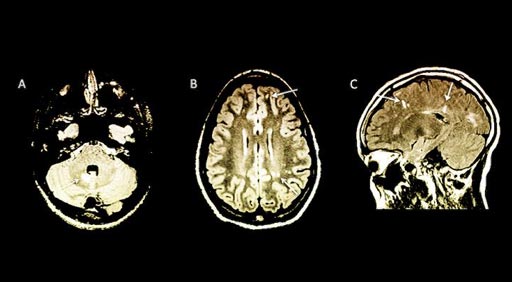 Image: The arrows in the images indicate abnormalities on the children’s MRI brain scans with no apparent symptoms of multiple sclerosis (Photo courtesy of Yale University).
Researchers in the US have found that MRI scans can help them identify children who have a high risk of developing Multiple Sclerosis (MS), even before symptoms become apparent.

The study included 38 children from 16 sites, in six countries, all of whom underwent Magnetic Resonance Imaging (MRI) scans for headache or other reasons. When MS is diagnosed in children, it may already be too late to prevent MS-related relapses and disabilities.

The study was carried out by researchers from the Yale School of Medicine (New Haven, CT, USA), and published in the November 2017, issue of the journal Neurology: Neuroimmunology & Neuroinflammation. The MRI brain scans showed unexpected signs of MS without the children showing any clinical symptoms of the disease. The results of the study could lead to earlier diagnosis and treatment for MS.

Around 42% of the children participating in the study who showed MRI findings of MS, developed the first clinical symptoms of MS around two years after the MRI. The children at the greatest risk of developing clinical systems of MS were those with a specific marker in spinal fluid, or those who showed changes to the spinal cord in the MRI images.

Lead author of the study, Naila Makhani, MD, assistant professor of pediatrics and neurology at Yale School of Medicine, said, "For the first time we have proposed a definition of RIS in children. Children with Radiologically Isolated Syndrome (RIS) may represent a high-risk group of children that needs to be followed more closely for the later development of clinical multiple sclerosis. We hope that our work will help inform expert guidelines for how to follow up children with RIS and help us accurately inform families of the risk of later developing multiple sclerosis, something we were previously unable to do."