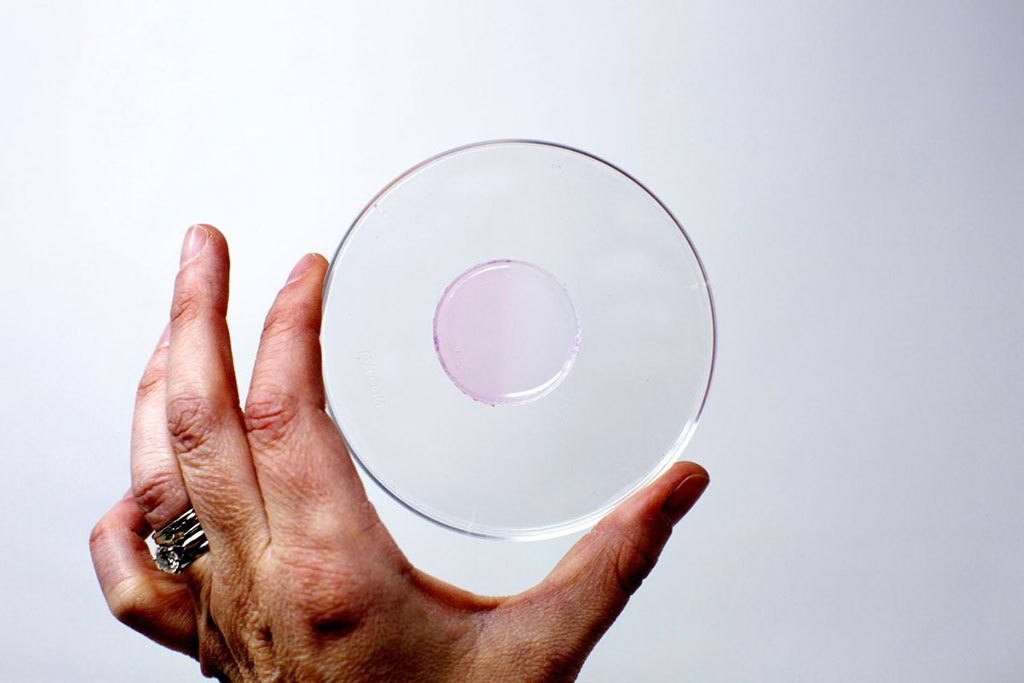 Image: A circle of the hydrogel, irradiated on the left half, whereas the right half is not irradiated (Photo courtesy of ASU)
A novel hydrogel applied directly to a patient's skin changes color in direct correlation to radiation therapy (RT) dose levels, claims a new study.

Developed by researchers at Arizona State University (ASU; Tempe, USA) and Banner-M.D. Anderson Cancer Center (Gilbert, AZ, USA), the gel-based nanosensor is impregnated with gold salts and amino acids. Exposure to ionizing radiation results in the conversion of gold ions in the gel to gold nanoparticles, which render a visual change in color in the gel due to their plasmonic properties. Without radiation, the hydrogel is colorless; but as it is exposed to radiation, it turns pink, with the color intensity directly correlated to the amount of radiation.

The gel nanosensor can detect complex topographical dose patterns, with the intensity of color formed in the gel serving as a quantitative reporter of the ionizing radiation. At the end of RT therapy, the gel is painlessly peeled off the skin and the color hue is measured with the aid of an absorption spectrometer. The gel has so far been tested on an anthropomorphic phantom and in live dogs undergoing clinical grade RT. The study was presented at the 64th annual meeting of the Biophysical Society, held during February 2020 in San Diego (CA, USA).

“The ease of fabrication, operation, rapid readout, colorimetric detection, and relatively low cost illustrate the translational potential of this technology for topographical dose mapping in radiotherapy applications in the clinic,” said lead author and study presenter Subhadeep Dutta, MSc, of ASU. “Our next plan is to convert it to an app-based system, where you can take a picture of a gel and that can predict the dose based on programming in the app. It's just measuring color, which is easy to do.”

Examples of current dose monitors include radiochromic films, which resemble a sheet of paper; but as they are sensitive to light and heat, they must be carefully handled, and require long processing times. Other methods include quantum dots and metal organic frameworks, which demonstrate an intense scintillating response, but provide only point dose information; and polymer gel dosimeters that rely on sophisticated readout techniques (such as MRI) for post-irradiation analysis.

Global Mammography Workstations Market to Surpass USD 0.19 Billion in 2028 Due to Increasing Prevalence of Breast Cancer

The global mammography workstations market is projected to grow at a CAGR of 6.8% from about USD 0.12 billion in 2020 to more than USD 0.19 billion in 2028, led by increasing prevalence of breast cancer... Read more

Global Ultrasound Device Market to Reach USD 9.5 Billion by 2027 Due to Rising Prevalence of Chronic Disorders

The global ultrasound devices market is projected to grow at a CAGR of 4.73% from USD 7.2 billion in 2021 to USD 9.5 billion by 2027, driven by a rise in the prevalence of chronic disorders such as cancer... Read more