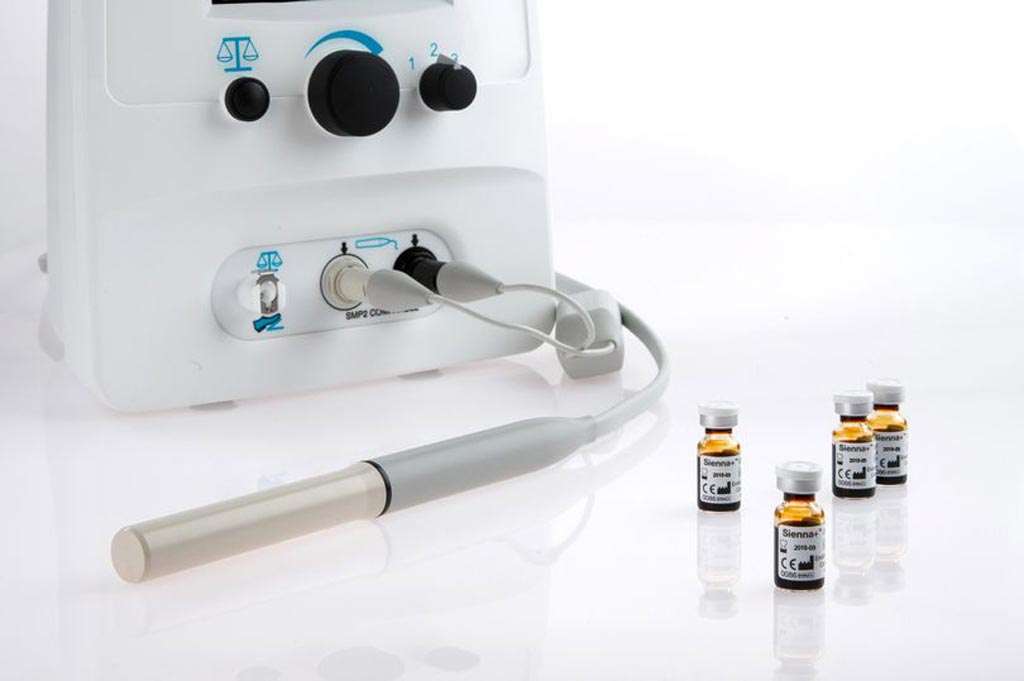 The Endomagnetics (Cambridge, United Kingdom) Sentimag magnetic localization system is comprised of a sensitive magnetic sensing probe and base unit designed to detect small amounts of Magtrace, a proprietary magnetic tracer injected into the breast tissue. The Magtrace particles then travel to lymph nodes and become physically trapped inside them, facilitating magnetic detection of the nodes with the aid of the Sentimag probe, which is applied to the patients’ skin in areas closest to the tumor site containing the lymph nodes.

Sensing of the magnetic particles is indicated by changes in audio and visual alerts from the base unit, enabling the surgeon to move the hand-held probe around the area of the lymph nodes to locate the SLN or nodes (if there are more than one). The surgeon then makes a small incision and removes the node, which is checked by a pathologist for the presence of cancer cells. A negative SLN biopsy result suggests that cancer has not spread to nearby lymph nodes, while a positive result may indicate that cancer is present in the SLN and may be present in other lymph nodes and possibly other organs.

In a study involving 147 patients with breast cancer that compared the Sentimag system to the control method of injecting patients with blue dye and radioactive materials together, and using a gamma probe to identify the SLN, 98% of patients had the same detection rate with both the Sentimag System and the control method. The most common adverse events were breast discoloration, which disappeared after three months; bradycardia; and potential allergic reaction to the magnetic materials.

“Sentinel lymph node biopsies are crucial for determining whether a patient’s breast cancer has spread and helping the provider determine the most appropriate course of treatment,” said Binita Ashar, MD, director of the division of surgical devices at the FDA Center for Devices and Radiological Health (CDRH). “This magnetic system we’re approving today will offer patients undergoing mastectomy an option for their sentinel lymph biopsy procedure that does not require the injection of radioactive materials.”

Finding metastatic cancer cells during breast cancer surgery requires first identifying the position of the SNLs, which have a diameter of just a few millimeters, and then excising those nodes to diagnose their pathology. If the cancer has not yet metastasized to an SLN, axillary lymph node excision can be omitted, thus preventing subsequent lymphedema and maintaining the patient's quality of life after surgery.