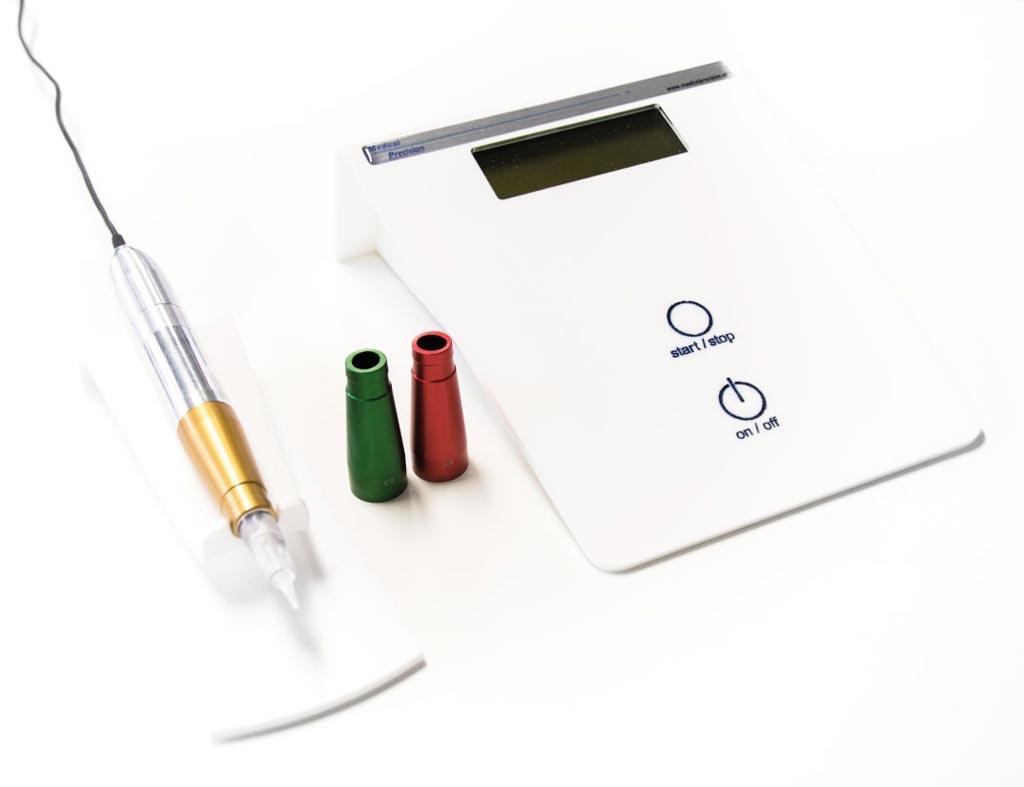 The Medical Precision (Zwolle, The Netherlands) Marking System is designed to apply reference points in a controlled manner to a patient's upper dermis using a permanent make-up (PMU) device. The markers, which are used to direct RT therapy, either completely fade away over time, or can instead be removed easily with a PMU laser. The system consists of three components: a PMU marking device; marking pens that have been set beforehand to the correct injection depth; and a needle module.

The PMU device feeds a marking pen with electric current pulses set to a precise vibration frequency and voltage before the procedure, as determined in cooperation with experienced RT lab technicians. Device controls include simple on/off and a start/stop buttons to activate the needle when a point needs to be placed. The electric pulses of the PMU device activate a magnetic hammer inside the pen, which vibrates an aluminum head placed on the pen. Three heads can be delivered, each anodized in a particular color with the depth engraved on it:

A disposable synthetic needle module containing three small needles is engaged in the head to apply the reference point. Once engaged, the pen releases the needle, which pulsates lightly at the depth for that head. The self-priming needle module draws up different pigment dyes, which are applied immediately afterwards. After the reference points have been applied, the needle module is disposed of safely. The pigments were selected specifically for RT marking applications.

Skin markings help align external RT to tumor sites. As RT sessions can last for weeks, it is important the radiographer uses the markers to line up each session so that the same area is treated each time. Both non-invasive (marker pen, henna) and invasive methods (tattoo) are available for marking. Currently, a tattoo with a needle pricked at angle of 30° to 1-2 mm depth to create a tattoo 2-3 mm diameter in size is used.