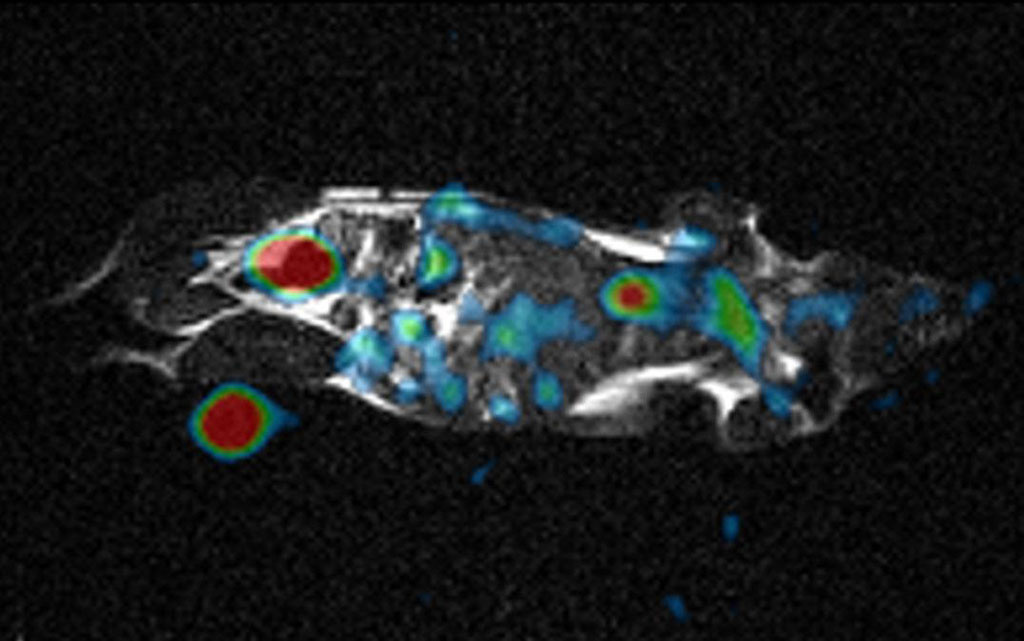 The work by researchers at the University of Tsukuba (Ibaraki, Japan) may allow for new medical diagnostics to be performed without expensive new equipment. MRI has become a crucial part of the medical toolkit for non-invasive visualization of internal organs. MRI machines operate by placing the patient in a very strong magnetic field, which will cause the nuclear spins of atoms in the body to align in the same direction, essentially acting like tiny magnets. Then, a RF signal of a very specific frequency is applied, which has the ability to flip the direction of the spins. When the nuclei relax back to their original aligned state, the precession of these spins about the magnet field direction can be measured by RF detector coils to determine the concentration of that particular atom. The majority of MRI machines in use today are optimized to look for the presence of hydrogen (1H) nuclei, which are naturally abundant in the body as a component of water molecules. Retrofitting such a machine for detecting other isotopes, like sodium-23 23Na, would require a great deal of expensive hardware upgrades.

Now, a team of researchers has demonstrated a proof-of-concept method for equipping a conventional MRI machine with the capability to image 23Na by installing a cross band RF repeater system. This is a device that receives signals at a certain frequency and rebroadcast at a different one. The research team tested the system with a saline "phantom" and an anesthetized mouse. Even though the resulting signal was much lower compared with custom-built 23Na machines, it could be amplified to produce comparable images. 23Na imaging has already been shown to be useful for applications involving the kidney, owing to its large sodium concentration, as well as the brain and heart. This approach may substantially reduce health care costs by providing completely new abilities to existing machines without requiring a complete refurbishment.

"The RF repeater, which is a commonly used device in amateur radio, can be placed directly inside the magnet bore of an existing MRI machine as a cost-effective upgrade," explained Professor Yasuhiko Terada. "Watching the motion of sodium ions inside the body provides detailed metabolic information not available from conventional MRI images."