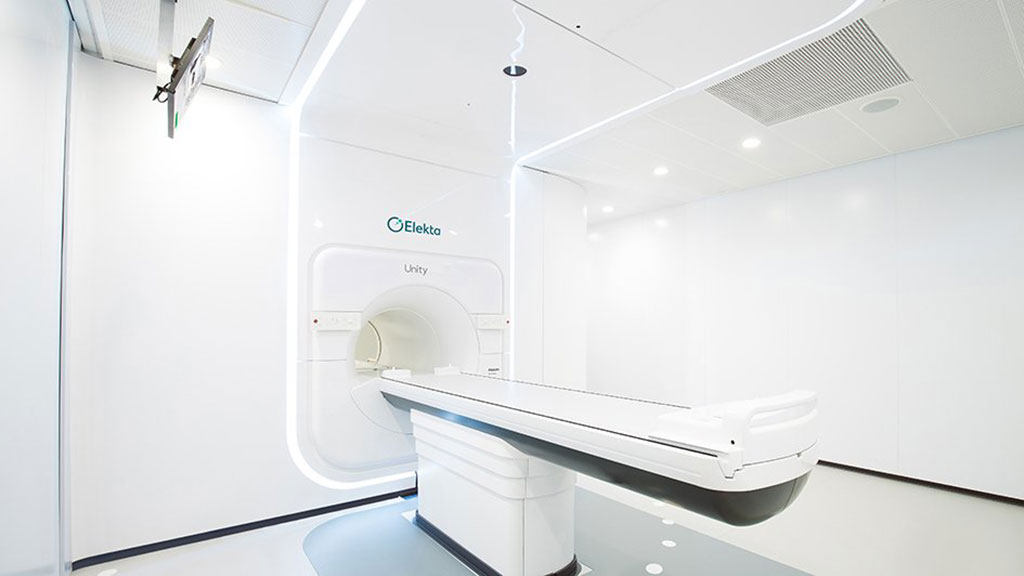 Image: Artificial Intelligence Reconstructs MRI Images to Accelerate and Better Guide Radiotherapy (Photo courtesy of Elekta)
An artificial intelligence (AI) that reconstructs MRI images of moving tumors can do so in seconds, offering a significant improvement on current methods to optimize radiotherapy treatment in the clinic.

The AI, called Dracula (short for ‘deep radial convolutional neural network’) developed by scientists at The Institute of Cancer Research (London, UK) can replicate four-dimensional MRI images of a patient’s whole anatomy, including tumors and healthy organs, from low quality images containing artefacts - visual anomalies not present in reality that arise from scans with incomplete information.

It can take up to several hours to reconstruct high quality 4D MRI images from these under-sampled scans, whereas the AI takes an average of 28 seconds. These reconstructed images could accurately guide the delivery of radiotherapy to tumors by tracking their movement while a patient is breathing. The process is called magnetic resonance guided radiotherapy (MRgRT) and allows radiotherapy treatment to be adapted accordingly to improve patient outcomes.

To treat patients with tumors that move as they breathe, 4D MRI images are needed to show the 3D volume of the tumor and surrounding organs at different time points during breathing - known as a respiratory phase. By combining numerous respiratory phases, the mid-position image can then be calculated from the 4D MRI image. Mid-position images reveal the average position of the tumor and its movement from breathing, and are needed to accurately plan radiotherapy treatment. An alternative to treating these types of tumors is to have a patient hold their breath so the tumor no longer moves, but this can be strenuous for the patient and makes treatment longer and more difficult.

Dracula allows 4D MRI and mid-position images to be obtained in seconds - and potentially online just before treatment - to guide the delivery of radiotherapy in real-time, as well as make treatment more adaptable based on the patient’s anatomy. In line with its name ‘neural network’, the AI works like a simplified version of neurons in the brain and learns to reconstruct higher quality 4D MRI images via a series of training examples. The researchers used low quality 4D MRI images that are unfit for clinical use as the input data for Dracula. With both information on the spatial dimensions and respiratory phases of a patient’s tumor and surrounding organs, the researchers could train Dracula to produce 4D MRI and mid-position images that were considered acceptable for use in the clinic by both a radiologist and a radiation oncologist.

Dracula’s performance was also verified against 4D MRI images reconstructed by another algorithm, MoCo-HDTV, for comparison, with image quality graded on a five-point Likert scale - zero denoting unreadable and five excellent. Dracula-reconstructed images received scores between 1.8 and 3.4, with the experts reporting some minor blurring and streaking that reduced visibility. Though not scoring as high as images produced by the time-intensive MoCo-HDTV, Dracula was still able to visualize the patient’s tumor and at-risk organs - in this case the heart and esophagus - very well, so that it could be used in practice to plan and guide radiotherapy treatment.

“Using an AI to rapidly reconstruct 4D MRI images of a cancer patient’s anatomy lets us accurately determine the location of tumors and characterize their motion right before radiotherapy treatment, which will enable us to increase the radiation dose targeting just the tumor and not healthy organs,” said study leader Dr. Andreas Wetscherek, Team Leader in Magnetic Resonance Imaging in Radiotherapy at the ICR. “This study demonstrates the potential of neural networks to achieve comparable imaging results to traditional methods in only a few seconds. It would be especially useful for cancers where we need to avoid the healthy organs around the tumor, such as pancreatic cancer, which currently limits the delivery of high doses of radiation to the tumor.”