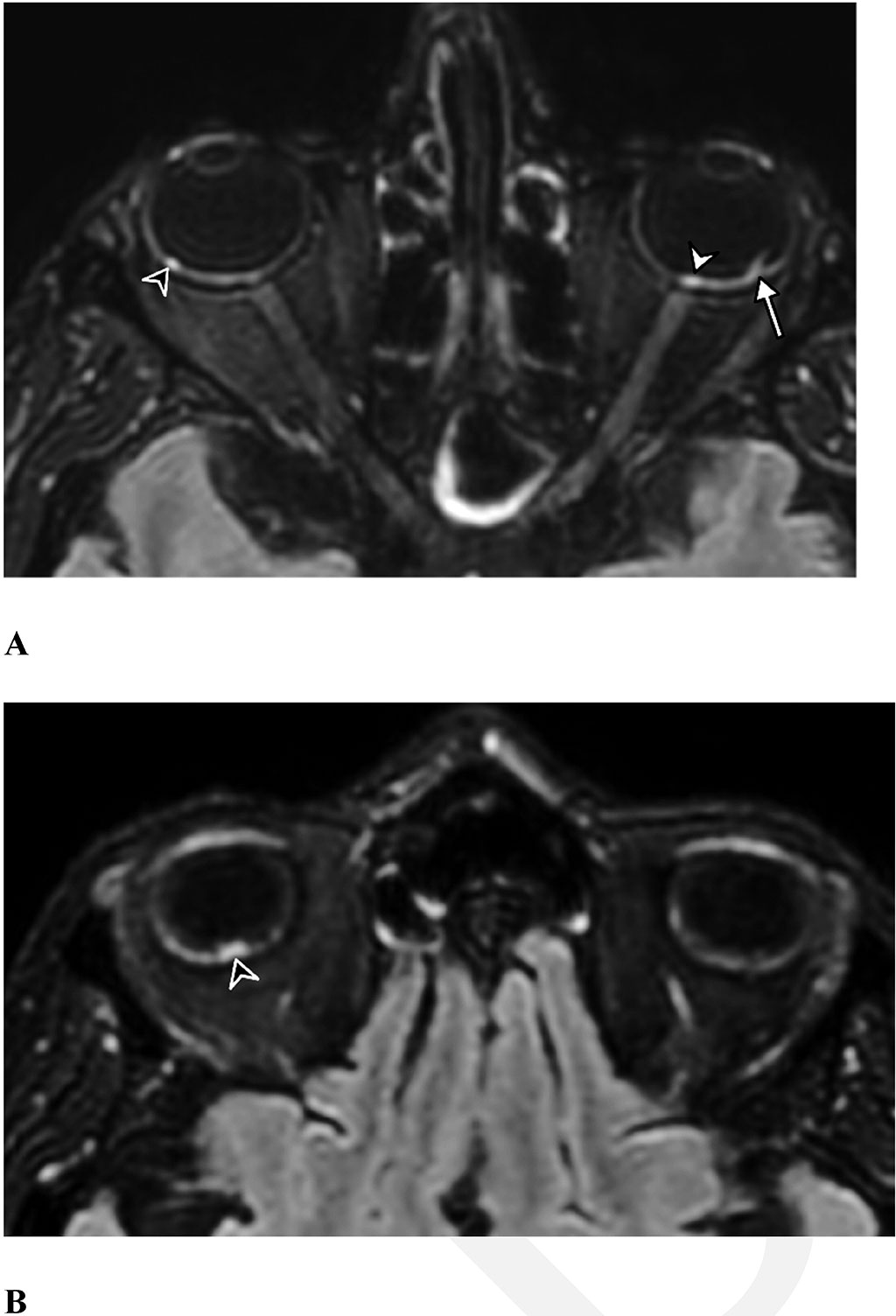 Image: Ocular MRI finding in a COVID-19 patient, including hyperintense nodules (A) and retinal detachment (B) (Photo courtesy of FOR)
A magnetic resonance imaging (MRI) study found significant abnormalities in the eyes of some people with severe COVID-19.

Researchers at Rothschild Foundation Hospital (FOR; Paris, France), CHU de Strasbourg (France), and other institutions conducted a retrospective observational study that included 129 patients with severe COVID-19 who also underwent brain MRI. In all, nine (7%) of the patients had one (or several) fluid-attenuated inversion recovery (FLAIR) hyperintense nodules of the posterior pole of the globe, were isointense on T1 scans, and showed no enhancement after gadolinium injection. All patients had nodules in the macular region, eight had bilateral nodules, and two had nodules outside the macular region.

The mechanism behind the nodule formation remains unknown, according to the researchers, although it could be related to inflammation triggered by the SARS-CoV-2 virus. Inadequate drainage of the veins of the eyes, a problem found in patients who spend time in the ICU in the prone position or intubated, may also be a factor, and seven of the nine patients with eye abnormalities on MRI had been placed in a prone position in the intensive care unit (ICU) for an extended period of time. The study was published on February 13, 2021, in Radiology.

“The results suggest that screening should be considered in all patients with severe COVID-19 to detect these nodules. In clinical practice, this screening could include dedicated exploration of the eyes with high-resolution MRI,” concluded lead author Augustin Lecler, MD, PhD, of FOR, and colleagues. “Our study advocates for screening of all patients hospitalized in the ICU for severe COVID-19. We believe those patients should receive specific eye-protective treatments.”

SARS-Cov-2 is known to target the angiotensin-converting enzyme-related carboxypeptidase (ACE2) receptor, which is largely expressed in the retina and the choroid. As ACE2 is the primary enzyme of the vasoprotective axis of the renin–angiotensin system in the retina, its downregulation might induce the development of retinal ischemia. Another possible hypothesis is a Valsalva retinopathy secondary to orbital proptosis, which can occur when the ocular venous system is affected by the increased central venous pressure, leading to an inadequate ocular venous drainage.