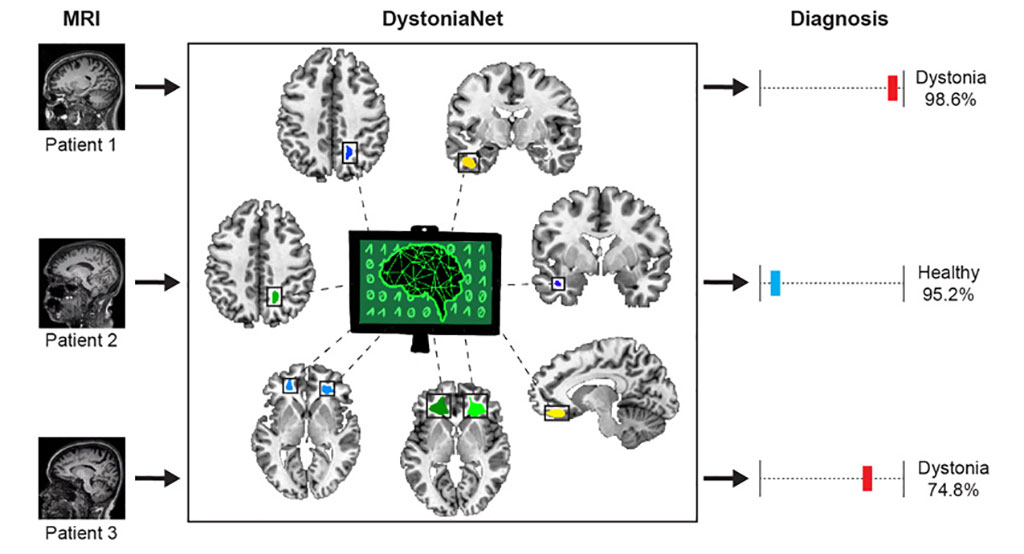 Image: Comparison of the MRI scans processed by DystoniaNet (Photo courtesy of MEEI)
The conjunction of magnetic resonance imaging (MRI) and artificial intelligence (AI) can identify patients with dystonia in under a second, according to a new study.

The new platform, called DystoniaNet, developed at the Massachusetts Eye and Ear Infirmary (MEEI; Boston, USA), can identify a microstructural neural network biomarker that allows objective and accurate diagnosis of isolated dystonia, based on the disorder pathophysiology and MRI structural brain images. The algorithm was developed using the MRI’s of 612 subjects, including 392 with three forms of isolated focal dystonia (laryngeal dystonia, cervical dystonia, and blepharospasm), and those of 220 healthy controls.

DystoniaNet successfully identified clusters in the corpus callosum, the anterior and posterior thalamic radiations, the inferior fronto-occipital fasciculus, and inferior temporal and superior orbital gyri as the biomarker components, regions that are known to contribute to abnormal interhemispheric information transfer, heteromodal sensorimotor processing, and executive control of motor commands. In all, the DystoniaNet AI biomarker showed an accuracy of 98.8% in diagnosing dystonia, with a referral of 3.5% of cases due to diagnostic uncertainty.

DystoniaNet also outperformed shallow machine-learning algorithms, showing nearly a 20% increase in benchmark diagnostic performance. Importantly, the microstructural neural network biomarker and its DystoniaNet platform showed substantial improvement over the current 34% agreement on dystonia diagnosis between clinicians. In addition, the diagnostic decision by DystoniaNet was computed in just 0.36 seconds. The study was published on October 1, 2020, in PNAS.

“We basically leveraged the advances made in deep learning and designed an architecture that was able to look at raw structural MRI and find a biomarker for dystonia that could help with the diagnosis of this disorder,” said study author Davide Valeriani, PhD. “We specifically took an approach that could be easily clinically translated, which is why we used raw structural MRI. Given the platform's performance and the average length of time to diagnosis, it has potential to beneficial impact the movement disorder field.”

Dystonia is a neurological disorder of heterogeneous pathophysiology, which causes involuntary muscle contractions leading to abnormal movements and postures. Its diagnosis is remarkably challenging due to the absence of a biomarker or gold standard diagnostic test. This leads to a low agreement between clinicians, with up to 50% of cases being misdiagnosed and diagnostic delays extending up to 10 years.