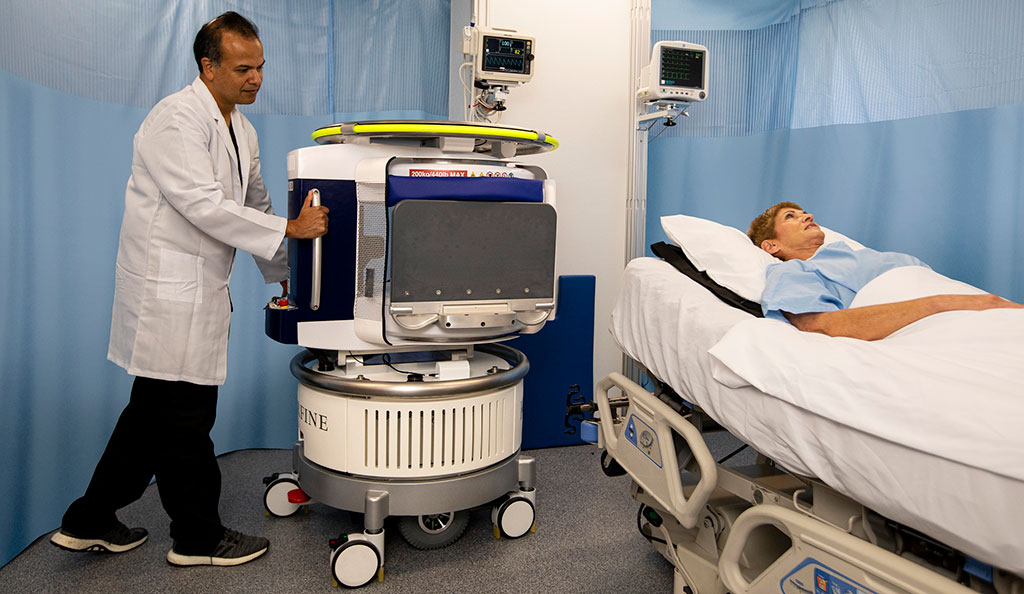 The Hyperfine Research (Guilford, CT, USA) Lucy Point-Of-Care MRI system is a low-field system that is 20X lower in cost, 35X lower in power consumption, and 10X lower in weight than current fixed conventional MRI systems. It also features ordinary permanent magnets that require no power or cooling, producing an image using low-power radio waves and magnetic fields. As a result, the system is highly portable and plugs directly into a standard electrical wall outlet, consuming a fraction of the power of traditional MRI.

Neither does the system require trained technicians, shielded electronics, or separate hospital facilities. The system is controlled from a standard tablet device, such as an iPad. Users choose the appropriate sequences and protocols from a simple playlist. Once the MRI scan has been completed, the images can be view directly on a tablet or smartphone, and can also be uploaded to the cloud for sharing and consultation with colleagues. Hyperfine is also working to develop proprietary artificial intelligence (AI) and deep learning (DL) software to reconstruct images and assist in diagnosis.

“More than 40 years after its first use, MRI remains a marvel; unfortunately, it also remains inaccessible. It's time that MRI made the jump to point of need, just like X-ray and ultrasound have before it. Going beyond that, nearly 90% of the world has no access to MRI at all,” said Khan Siddiqui, MD, chief medical officer of Hyperfine Research. “The Hyperfine system was designed to address the limitations of current MRI systems in order to make MRI accessible anytime, anywhere, to any patient.”

A new computed tomography (CT) study reveals that some COVID-19 patients have reduced gray-matter volume (GMV) in the frontal-temporal lobe of the brain. Researchers at the Georgia Institute of Technology... Read more

An artificial intelligence (AI) algorithm can be used to identify forgotten inferior vena cava (IVC) filters on radiography exams, according to a new study. Developed at the University of California,... Read more

The global medical X-ray detectors market was valued at USD 2.95 billion in 2020 and is projected to grow at a CAGR of 5.1% during the forecast period from 2021 to 2029, driven mainly by the new generation... Read more