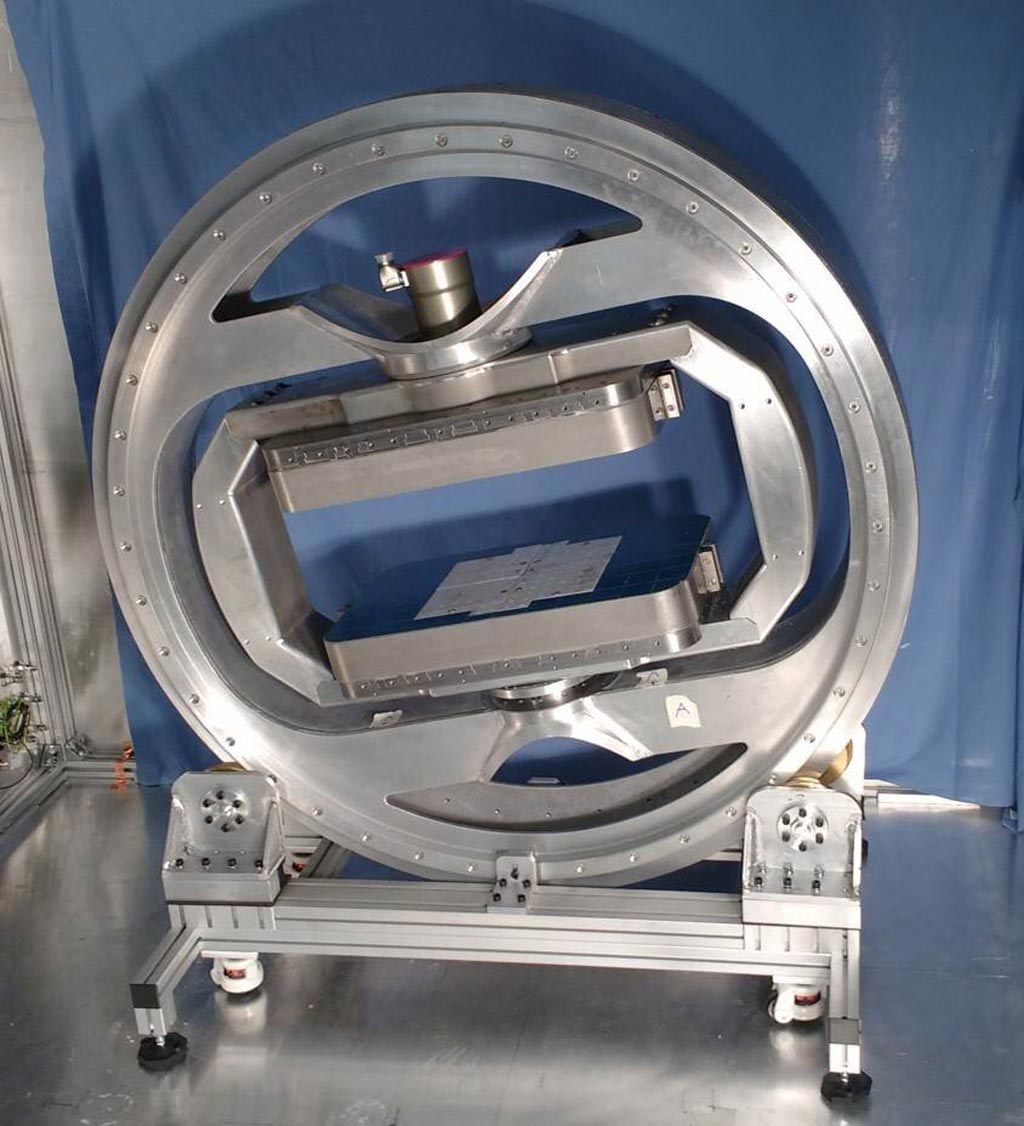 Image: The prototype \"magic\" MRI scanner (Photo courtesy of Imperial College London).
A scaled-down magnetic resonance imaging (MRI) scanner that can rotate the orientation of its magnetic field could provide the basis for new, noninvasive diagnostics, according to a new study.

Developed by researchers at Imperial College London (Imperial; United Kingdom), the Royal Veterinary College (Hatfield, United Kingdom), and other institutions, the new scanner uses servo motors and sensors similar to those found in manufacturing robots to rotate around a leg or arm and orientate the magnetic field. By doing so, a 55-degree angle between the collagen fibers and the magnetic field can be established, which makes soft tissue image very bright. This is not possible in current hospital MRI scanners.

To optimize scan planning and new MRI data‐processing methods, six caprine and 10 canine knees were scanned at various orientations, with image intensities in segmented voxels used to find the orientation vectors of the collagen fibers. Vector field and tractography plots were computed to define an alignment index. The knees were subsequently assessed by a specialist orthopedic veterinarian, who dissected and photographed the joints. The results showed that using the magic angle can accurately detect ligament and tendon damage with encouragingly high consistency. The study was published on May 12, 2019, in Magnetic Resonance in Medicine.

“Tendons, ligaments and meniscus are not usually visible with MRI, due to the way water molecules are arranged. These structures are normally black on an MRI scan—they simply don't produce much signal that can be detected by the machine to create the image,” said Karyn Chappell, MD, of ICL. “This is because they are made mostly of the protein collagen, arranged as fibers. The collagen fibers hold water molecules in a tight configuration. If you do see a signal it suggests there is more fluid in the area, which suggests damage, but it is very difficult for medical staff to conclusively say if there is injury.”

“Previously the magic angle phenomenon was thought of as a problem, as it could mean medical staff mistakenly thinking the knee is injured. However, I realized that if we took a number of scans around the knee, we could use the signal produced by the magic angle effect to build a clear picture of the knee structures,” concluded Dr. Chappell. “Specifically, we can combine images obtained at different magnet angles and not only increase the brightness, but also establish the pattern of collagen fibers in the knee structures, which is crucial information ahead of treatments such as repairing a torn meniscus.”

In tightly bound collagen, water molecules are restricted, causing very short T2 times, accounting for the lack of signal. But when the molecules lie at 54.74° (the magic angle) from the main magnetic field, they appear hyperintense due to a lengthening of T2 times, with corresponding signal increase. The reason for this change is quantum mechanics, resulting from an interaction of Hamiltonian spins. In structured collagen, water binds to the outside of protein, and therefore exhibits an orientation-dependent effect.