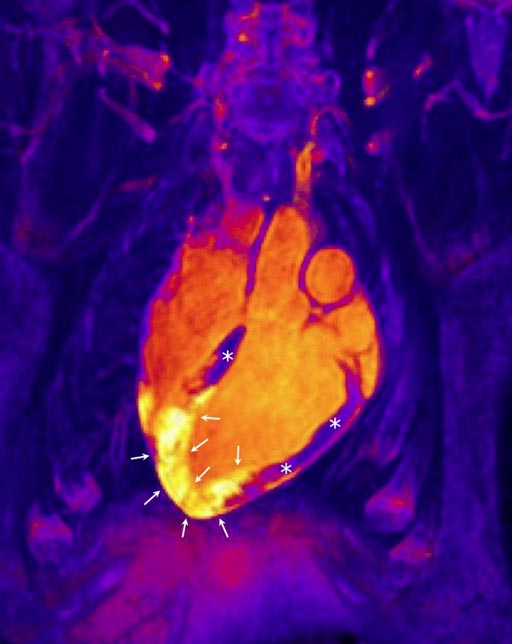 Image: The 3D image shows the results of an MRI scan following an acute MI (Photo courtesy of the CNIC).
Researchers have demonstrated that the human heart responds differently to an infarction than previously assumed.

The researchers used Magnetic Resonance Imaging (MRI) millimeter-resolution scans for their research, and mapped the tissue composition of the myocardium to investigate how it reacts to an infarction.

One article was published online in the August 22, 2017, issue of the journal Circulation and in the journal Circulation Research by scientists from the Centro Nacional de Investigaciones Cardiovasculares Carlos III (CNIC; Madrid, Spain), Hospital Universitario Fundación Jiménez Díaz (FJD; Madrid, Spain), and the University Hospital of Salamanca (IBSAL; Salamanca, Spain).

The results of the two independent studies reverse the current view that progressive repair of the myocardium takes place after an infarction, and could lead to new and better therapies. Scientists previously believed that an inflammatory response with increased water content, and cellular infiltration, were the immediate consequences of a heart attack, continuing for one week or more after the event.

Cardiologist Dr. Borja Ibáñez, said, "the discovery of the bimodal inflammatory response in the human heart forces us to think about the best timing for MRI scans used in clinical trials to quantify irreversible injury and to monitor the effectiveness of interventions to reduce this injury. Until now this question was not considered important, and cardiac imaging studies have been conducted on any day in the postinfarction period. The new findings show that the optimal time for these scans is between postinfarction days 4 and 7, when the second inflammatory/edematous wave is prominent and affects the entire region that was shut off from the blood supply during the infarction."