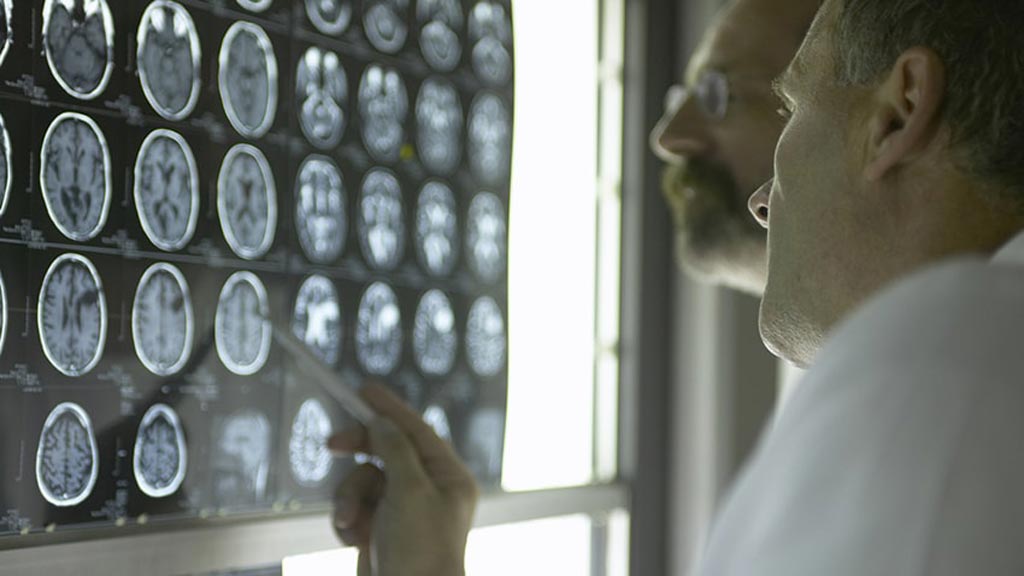 Image: Clinicians studying MRI images of the brain (Photo courtesy of MHealth Lab, Michigan Medicine, University of Michigan).
Researchers in the US have investigated whether widespread pain, possibly a marker of centralization in the nervous system, originates in the brain.

The researchers compared data from patients with a clinical diagnosis of urological chronic pelvic pain syndrome, fibromyalgia patients, and pain-free controls that took part in the Multidisciplinary Approach to the Study of Chronic Pelvic Pain (MAPP) network study.

The researchers from the University of Michigan (Ann Arbor, MI, USA) published their findings in the June 30, 2017, issue of the journal Pain. They used data from 1,079 participants from the MAPP study, including questionnaire results about pain severity and function, and maps of where on the body map the pain was located. A subset of the participants also underwent functional and structural Magnetic Resonance Imaging (MRI) scans.

Patients suffering from urological chronic pelvic pain syndrome who had widespread pain, also had increased brain gray matter volume, and functional connectivity, with the sensorimotor and insular cortices. The brain gray-matter volume changes and changes in functional connectivity were the same as those in fibromyalgia patients. These changes however were not found in the pain-free control group of patients.

Associate professor of anesthesiology and rheumatology, Michigan Medicine, Richard Harris, PhD, said, "Sometimes we can easily pinpoint what is causing a person pain. But, there are still 1 in 5 Americans who suffer from persistent pain that is not easily identifiable. Surprisingly, many of the individuals, in addition to having pain located in the pelvic region, had pain also widely distributed throughout their body. Interestingly, when we put these individuals into the brain imaging scanner, we found that those who had widespread pain had increased gray matter and brain connectivity within sensory and motor cortical areas, when compared to pain-free controls. This study represents the fact that pelvic pain patients, a subset of them, have characteristics of fibromyalgia."