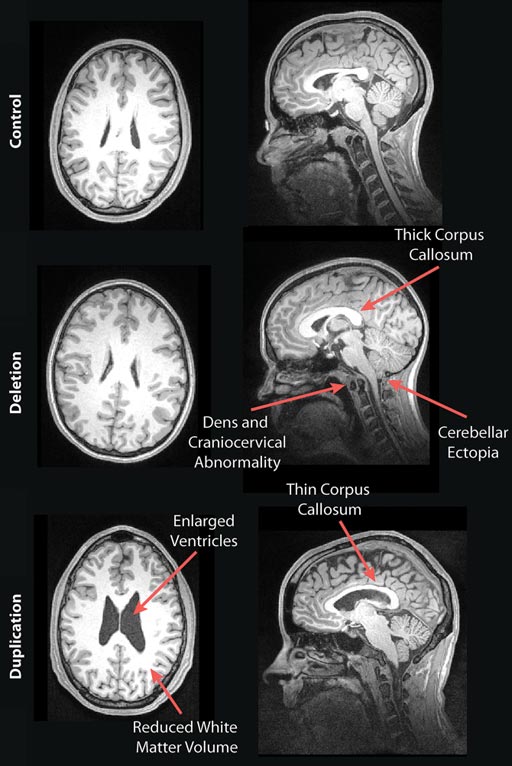 Image: The MRI images show examples of the brains of a deletion carrier, a duplication carrier, and a control participant in the study (Photo courtesy of RSNA).
A first-of-a-kind study has found structural abnormalities in the brains of patients with one of the most common genetic causes of autism.

The researchers found the abnormalities in Magnetic Resonance Imaging (MRI) scans of the patients and were able to link the findings to the patients’ cognitive and behavioral impairments.

The results of the study were published online in the August 2017 issue of the journal Radiology by researchers from the Brain Development Research Program of the University of California, San Francisco (UCSF; San Francisco, CA, USA), and from four other sites.

The study participants included patients with deletions, and others with duplications of genetic information on chromosome 16p11.2, as well as controls and family members without autism. Study participants underwent cognitive and behavioral testing, and the MRI images were reviewed by neuroradiologists.

The results showed a number of striking differences in the brain structures of patients carrying the deleted and duplicated chromosome, compared with non-carriers, and family members without autism.

The researchers concluded that the link between the abnormalities in the MRI scans, and cognitive and behavioral impairments, could help clinicians in the future to predict which autism patients needed urgent medical interventions, and which do not.

Senior author of the study, Elliott Sherr, MD, PhD, said, “Often studies like this focus on high-functioning individuals, but this was an ‘all-comers’ group. We didn’t do mathematical algorithms but rather used the trained eyes of neuroradiologists to evaluate the scans of a full range of individuals. When you look at a broad range of people like this, from developmentally normal to more significantly challenged, you’re better able to find these correlations.”