Researchers Investigate Cause of Contrast Agent Deposits in MS Patients 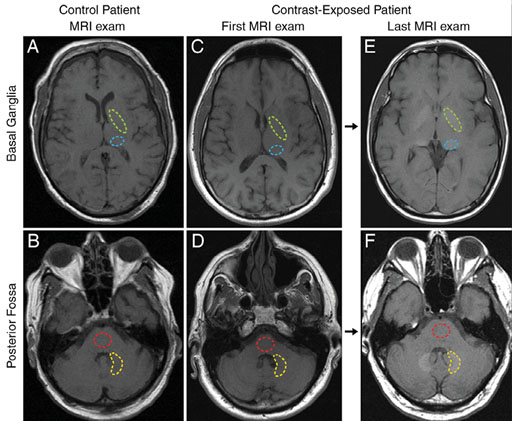 Image: A comparison of MRI exams carried out with and without gadolinium-based contrast agents (Photo courtesy of Radiology Journal).
The results of a new study involving multiple sclerosis patients, show how performing repeated MRI scans on the patients with gadolinium-based contrast agents leads to the deposition of the agents in the brains of the scanning subjects.

The researchers from the Charité - Universitätsmedizin Berlin (Berlin, Germany) and the Max Delbrück Center for Molecular Medicine (Berlin, Germany) compared the use of linear and macrocyclic gadolinium-based MRI contrast agents, and how their use led to the deposition of the agents in multiple sclerosis patients’ brains.

The results of the study, published in the December 2016 issue of the journal Multiple Sclerosis, suggest that the use of 'macrocylcic contrast agents' reduces the risk of accumulation of the agents in the brain.

Study leader PD Dr. Michael Scheel, said, "Patients who received a different type of MRI contrast agent - one that is referred to as a macrocyclic contrast agent - showed no evidence of gadolinium brain deposition. Available data currently suggest that the risk of deposits is considerably higher with contrast agents that have a linear molecular structure. This effect appears to be absent, or much reduced, when using contrast agents with a ring-shaped, macrocyclic structure."