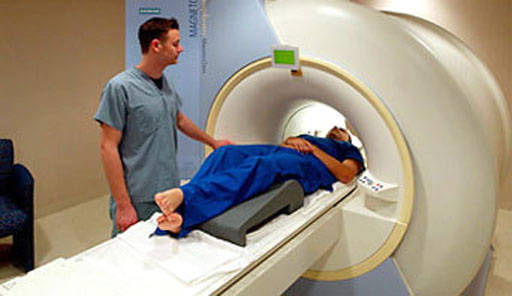 Image: A patient undergoing an MRI scan (Photo courtesy of the NHS, UK).
Researchers in Finland have found that heavy alcohol consumption during adolescence results in cortical thinning and alters brain development.

The research was published in the December 2016 issue of the journal Addiction. The study group included young people who had been drinking alcohol heavily throughout adolescence.

The MRI scans showed a statistically significant decrease in grey matter volume in the anterior cingulate cortex bilaterally of the brain, and in the right insula, in those participants with a history of heavy alcohol consumption during adolescence.

First author of the study, Noora Heikkinen, said, "The maturation of the brain is still ongoing in adolescence, and especially the frontal areas and the cingulate cortex develop until the twenties. Our findings strongly indicate that heavy alcohol use may disrupt this maturation process. The exact mechanism behind these structural changes is not known. However, it has been suggested that some of the volumetric changes may be reversible if alcohol consumption is reduced significantly. As risk limits of alcohol consumption have not been defined for adolescents, it would be important to screen and record adolescent substance use, and intervene if necessary."