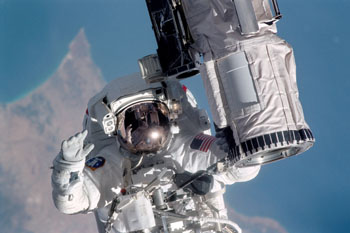 Image: Mission specialist Michael Gernhardt performing a spacewalk (Photo courtesy of NASA).
Researchers have found that long missions in space result in atrophy of the muscles supporting the spine of astronauts.

The study included six crew members of the International Space Station (ISS). The astronauts underwent one Magnetic Resonance Imaging (MRI) scan of the spine before the mission to the ISS, one upon their return to Earth, and a third scan one to two months after their return.

The research study funded by the National Aeronautics and Space Administration (NASA; Washington, DC, USA) was published online in the October 2016, issue of the journal Spine, and provides insights into the connection between prolonged space flights, spinal disc disease and back pain.

The NASA astronauts spent between four and seven months in the ISS in microgravity. The aim of the study was to find which factors affect lower back pain and the strength of the lumbar spine during long-duration spaceflight, and what happens when the astronauts returning to Earth. More than half of ISS crew members reporting spinal pain.

The researchers did not find any change in the spinal disc height of the astronauts but found an increased risk of spinal disc herniation, around four times higher than that in matching controls. The astronauts gained approximately two inches in height during their time in space.

Dr. Douglas G. Chang, University of California, San Diego, said, "This could provide helpful physiological information to support a manned mission to Mars. These measurements run counter to previous hypotheses about the effects of microgravity on disc swelling. Whether new exercise countermeasures can prevent in-flight paraspinal muscle atrophy, improve spinal pain and function, shorten recovery time, and how such exercise might be performed in a microgravity environment with available exercise equipment need further study."