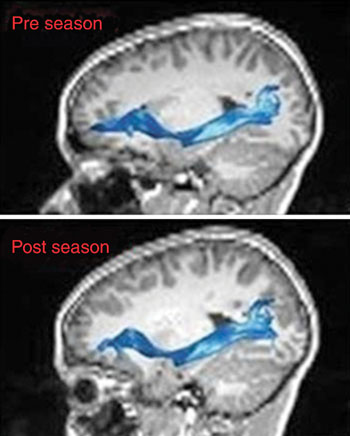 Image: The MR images are of the left inferior fronto-occipital fasciculus before and after the football-playing season (Photo courtesy of RSNA).
New research shows that young American football players may suffer from changes in the white matter of their brain despite the fact that they were not diagnosed with concussion.

The changes in the youth football players’ brains may even develop during only one season. The researchers also found a significant relationship between the white matter changes and the exposure of the players to head impacts.

The results of the study were published online in October 2016 in the journal Radiology. The researchers studied 25 male football players eight to 13 years of age, and recorded head impact data using the Head Impact Telemetry System (HITs). The participants were tested using Magnetic Resonance Imaging (MRI) Diffusion-Tensor Imaging (DTI) and other multimodal neuroimaging scans to find microstructural changes in the white matter of the brain. The researchers showed that there was a significant relationship between head impacts and decreased Fractional Anisotropy FA in the tissue where white and gray matters meet. None of the players had any symptoms, or signs of concussion.

Lead author of the study, Christopher T. Whitlow, MD, PhD, MHA, Wake Forest School of Medicine (Winston-Salem, NC, USA), said, "Most investigators believe that concussions are bad for the brain, but what about the hundreds of head impacts during a season of football that don't lead to a clinically diagnosed concussion? We wanted to see if cumulative sub-concussive head impacts have any effects on the developing brain. We found that these young players who experienced more cumulative head impact exposure had more changes in brain white matter, specifically decreased FA, in specific parts of the brain. These decreases in FA caught our attention, because similar changes in FA have been reported in the setting of mild TBI."