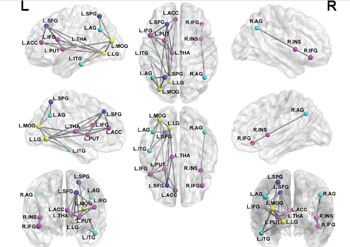 Image: The image shows a pediatric PTSD-related sub-network of the brain (Photo courtesy of RSNA).
The results of a new study suggest that children suffering from Post-Traumatic Stress Disorder (PTSD) experience disruptions in the neural networks in their brains.

The researchers used Magnetic Resonance Imaging (MRI) Diffusion-Tensor Imaging (DTI) to investigate the brain structure of pediatric patients who had been victims of the 2008 earthquake in Sichuan in which nearly 70,000 people died, and more than 370,000 were injured. Some of the patients were suffering from PTSD, while others were not. The images showed changes in the brains of the children with PTSD suggesting decreased network efficiency between linked regions of the brain.

The study was published online in October 2016 in the journal Radiology and could help researchers find new treatments for PTSD, a condition that is often the result of one or several traumas. Children with PTSD may suffer from lasting changes in brain structure and brain function. The Chinese researchers used MRI imaging to compare the brain structure in 24 pediatric patients with PTSD, and another 23 children exposed to trauma but without PTSD.

Lead author of the study, Qiyong Gong, MD, PhD, West China Hospital, Sichuan University (Chengdu, China), said, "Generally speaking, the structural connectome and the functional connectome are based on different types of raw images, which may be used to investigate the brain's abnormalities through different views. In a previous functional and current structural connectome study of the same patient group, we found a shift toward regularization in the brain networks of the PTSD patients relative to controls. Thus, we speculate that this regularization process may be a general pattern of pediatric PTSD. These abnormalities suggest that PTSD can be better understood by examining the dysfunction of large-scale spatially distributed neural networks.