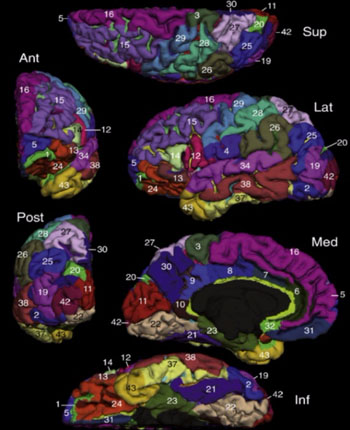 Image: The Destrieux atlas shows the manual parcellation and the anatomical regions of one hemisphere of the human brain (Photo courtesy of Dr. Lena Palaniyappan).
The results of an international study indicate that the brains of schizophrenia patients can heal, and can reorganize and fight the disease.

The research was published in a study entitled ‘Dynamic cerebral reorganization in the pathophysiology of schizophrenia: a MRI-derived cortical thickness study’ that was published online on May 26, 2016, in the journal Psychological Medicine. The research was carried out by scientists at the Robarts Research Institute, Western University (London, ON, Canada) University of Nottingham, (Nottingham, UK), and in universities and institutes in China, and one institute in Canada.

The results showed that a reduction in cortical thickness in the brain was accompanied by increased thickness in distributed regions of the brain, and that there was reduced deviation from the control patients with increasing duration of the illness.

The researchers concluded that subtle reorganization of the cerebrum indicates that the brain has an inherent plasticity that may occur in parallel with tissue reduction in adult schizophrenia patients.