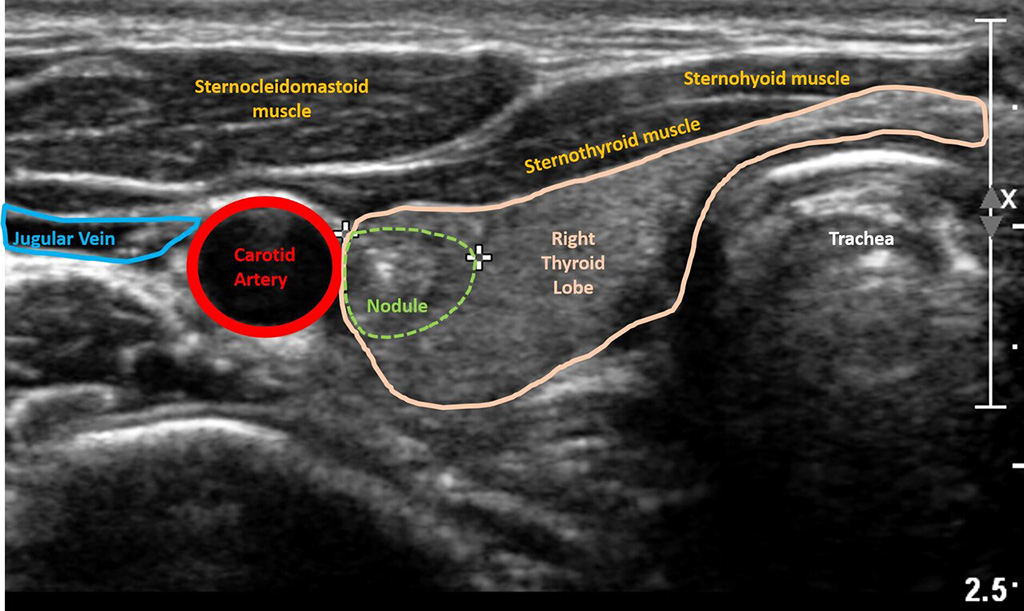 Image: Ultrasound image of thyroid nodule (Photo courtesy of Sidney Kimmel Cancer Center -- Jefferson Health)
A new study by researchers from the Sidney Kimmel Cancer Center -- Jefferson Health (Philadelphia, PA, USA) has demonstrated that a non-invasive method of ultrasound imaging, combined with a Google-platform machine-learning algorithm, could be used as a rapid and inexpensive first screen for thyroid cancer.

The majority of thyroid nodules is not cancerous and causes no symptoms. Currently, ultrasounds can tell if a nodule looks suspicious, and then the decision is made whether to do a needle biopsy or not. If examining the cells of a needle biopsy proves inconclusive, the sample can be further tested via molecular diagnostics to determine risk of malignancy. However, the standards for when to use molecular testing are still in development, and the test is not yet offered in all practice settings, especially at smaller community hospitals. The latest study, although preliminary, suggests that automated machine learning shows promise as an additional diagnostic tool that could improve the efficiency of thyroid cancer diagnoses.

In order to improve the predictive power of the first-line diagnostic, the ultrasound, Jefferson researchers looked into machine learning or artificial intelligence (AI) models developed by Google. The researchers applied the machine-learning algorithm to ultrasound images of patients’ thyroid nodules to see if it could pick out distinguishing patterns. The researchers found that their algorithm performed with 97% specificity and 90% predictive positive value, meaning that 97% of patients who truly have benign nodules will have their ultrasound read as “benign” by the algorithm, and 90% of malignant or “positive” nodules are truly positive as classified by the algorithm . The high specificity is indicative of a low rate of false positives; this means that if the algorithm reads a nodule as “malignant” it is very likely to truly be malignant. The overall accuracy of the algorithm was 77.4%.

“Machine learning is a low-cost and efficient tool that could help physicians arrive to a quicker decision as to how to approach an indeterminate nodule,” said John Eisenbrey, PhD, associate professor of radiology and lead author of the study. “There are so many potential applications of machine learning. In the future we’d like to make use of feature extraction, which will help us identify anatomically relevant features of high risk nodules.”