Surgeons Perform MIS in Hybrid OR with Robot System 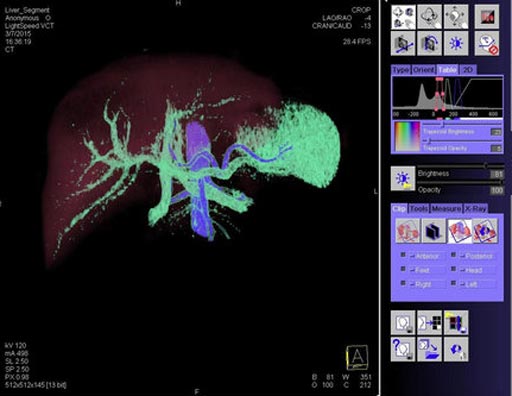 Image: The CT image shows how the surgeons adjusted the trapezoid controls on the table window for improved liver segmentation (Photo courtesy of Siemens Healthcare).
Surgeons in a Brazilian hospital have for the first time performed a liver resection on a patient in a hybrid OR using robotic imaging system, and a surgical robot.

The success or failure of endophytic liver tumor resection surgery often depends on the quality of the diagnostic images acquired before and during the procedure.

The patient who underwent the liver resection had three hypovascular endophytic liver tumors. Instead of using standard ultrasound imaging to mark the tumors, the surgeons used both pre-operative Computed Tomography (CT) imaging and intra-operative imaging with Siemens’ Artis zeego.

The tumors were clearly visible in the pre-operative CT images and were followed during the procedure using the intra-operative syngo DynaCT and the Artis zeego system. The surgeons then fused both CT datasets to create a combined 3D volume image dataset and analyzed this using Siemens’ syngo Embolization Guidance software to locate and highlight the tumors and feeding arteries. The surgeons then docked the da Vinci system to the patient for the tumor resection using the da Vinci system. During the procedure they used the highlighted tumors in the combined 3D dataset as a reference to help them navigate to the tumors during surgery.

The surgeons also plan to use the procedure for kidney or lung cancer resections in the future.