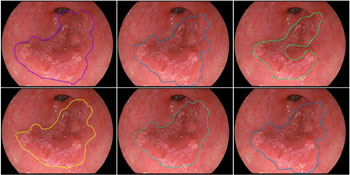 Image: Contours of early esophageal cancer drawn by specialists, compared to the contour drawn by the computer algorithm (top-right) (Photo courtesy of the Eindhoven University of Technology).
Researchers in the Netherlands have demonstrated a computer algorithm that can scan esophagus images and recognize signs of esophageal cancer nearly as accurately as gastroenterologist specialists can.

The research was published in the July issue of the journal Endoscopy. Patients with gastric irritation in the esophagus from prolonged reflux are at risk of developing abnormal tissue, a condition called Barrett's esophagus. The condition is one of the main risk factors for esophageal cancer, and requires patients to undergo regular endoscopic check-ups in hospital.

The software was developed by researchers at the Technical University of Eindhoven (TU/e; Eindhoven, Netherlands) and was tested at the Catharina Hospital (Eindoven, Netherlands). Only a handful of specialists in the Netherlands are able to detect the early stages of the disease when it can still be treated effectively. There are approximately 2,500 new esophageal cancer patients in the Netherlands every year, and this increases every year because of the rise in the number of overweight people that are more susceptible to the disease. The new computer analysis technique could save patients unnecessary and costly surgery by enabling earlier detection of the disease.

Barrett's esophagus specialist Dr. Erik Schoon, gastroenterologist, Catharina Hospital, said about the results, "To recognize early forms of cancer in a Barrett's esophagus is one of the most difficult things to do in our field."