Study Shows fMRI Scans May Include Too Many False Positive Results 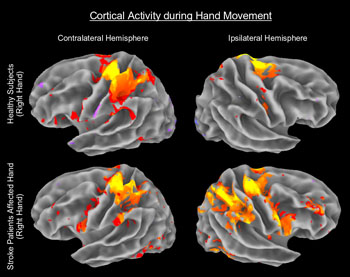 Image: An example of a functional Magnetic Resonance Imaging (fMRI) scan (Photo courtesy of the Athinoula A. Martinos Center for Biomedical Imaging at Massachusetts General Hospital).
Researchers in Sweden have shown that statistical techniques in widespread use today for analyzing brain activity based on fMRI scans may be unreliable.

The study was published online before print in the June 28, 2016, issue of the Proceedings of the National Academy of Sciences (PNAS). The researchers tested existing analysis techniques by using them to analyze know reliable data, and found that functional spatial extent inferences from Magnetic Resonance Imaging (fMRI) images showed false positive activity in the brain in up to 60% of the cases, instead of the accepted number of 5%.

The researchers from Linköping University (Linköping, Sweden), and the University of Warwick (Coventry, UK) used new statistical analysis methods, based on fewer assumption and one thousand times more calculations than existing methods, and were able to achieve results that were significantly more certain. The researchers used modern computer graphic processing cards and were able to reduce the processing time considerably.

The researchers used imaging data from 499 healthy subjects, made three million comparisons of randomly selected groups of subjects, and analyzed the data using existing calculation methods and the new heavier calculation techniques. The researchers found that the new methods achieved a considerably better result, with only 5% difference, compared to differences of up to 60% using existing analysis techniques.

Dr. Eklund, Linköping University, said, "It really feels great; it's recognition and I hope we can get a discussion going in research circles regarding how we validate models. Today, there is both data available to validate and enough processing power to perform the calculations."