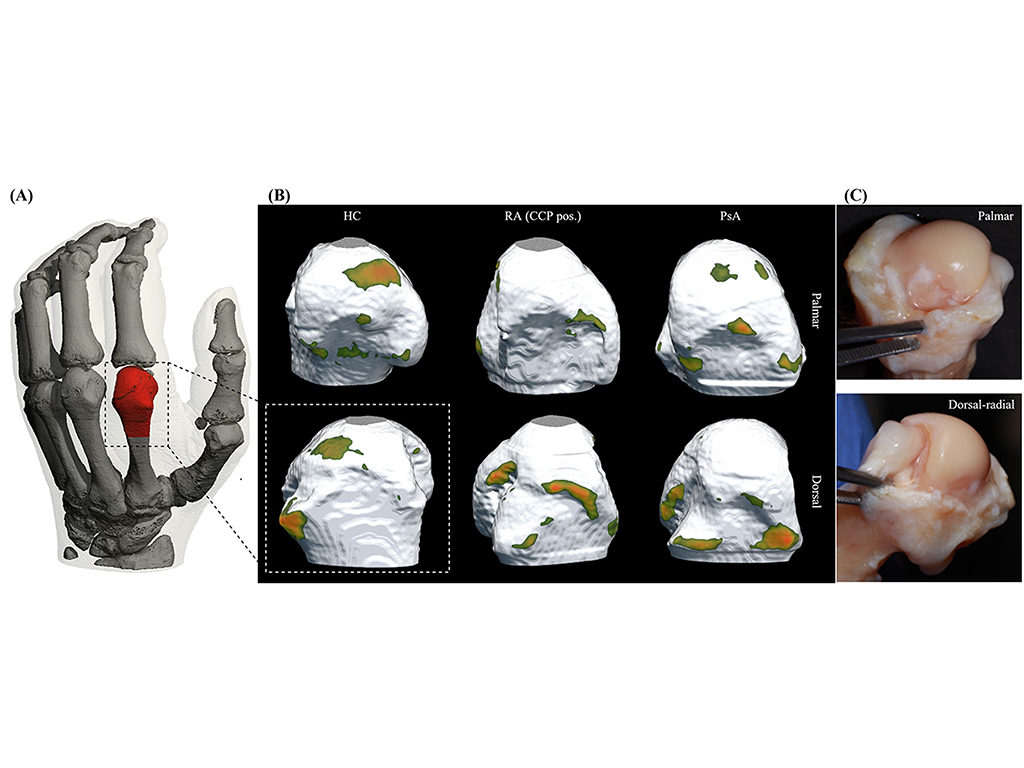 There are many different types of arthritis, and diagnosing the exact type of inflammatory disease that is affecting a patient’s joints is not always easy. Missing biomarkers currently often make precise classification of the relevant type of arthritis difficult. X-ray images used to aid diagnosis are not completely reliable either, as their two-dimensionality is not precise enough and leaves room for interpretation. This is in addition to the fact that positioning the joint being examined for an X-ray image can be difficult. Now, a team of computer scientists and physicians have succeeded in teaching an artificial neural network to differentiate between rheumatoid arthritis, psoriatic arthritis and healthy joints.

An interdisciplinary research project conducted at Friedrich-Alexander-Universität Erlangen-Nürnberg (FAU, Erlangen, Germany) and Universitätsklinikum Erlangen (Erlangen, Germany) investigated the following questions: Can artificial intelligence (AI) detect various types of arthritis using joint shape patterns? Does this method allow us to make more precise diagnoses in cases of undifferentiated arthritis? Are there certain areas in joints that should be examined in more detail during a diagnosis? To find the answers to its questions, the research team focused its investigations on the metacarpophalangeal joints of the fingers – regions in the body that are very often affected early on in patients with autoimmune diseases such as rheumatoid arthritis or psoriatic arthritis.

A network of artificial neurons was trained using finger scans from high-resolution peripheral quantitative computer tomography (HR-pQCT) with the aim of differentiating between “healthy” joints and those from patients with rheumatoid or psoriatic arthritis. HR-pQCT was selected as it is currently the best quantitative method of producing three dimensional images of human bones in the highest resolution. In the case of arthritis, changes in the structure of bones can be very accurately detected, which makes precise classification possible. A total of 932 new HR-pQCT scans from 611 patients were then used to check if the artificial network can actually implement what it had learned: Can it provide a correct assessment of the previously classified finger joints?

The results showed that AI detected 82% of the healthy joints, 75% of the cases of rheumatoid arthritis and 68% of the cases of psoriatic arthritis, which is a very high hit probability without any further information. When combined with the expertise of a rheumatologist, it could lead to much more accurate diagnoses. In addition, when presented with cases of undifferentiated arthritis, the network was able to classify them correctly. Whereas the research team was able to use high-resolution computer tomography, this type of imaging is only rarely available to physicians under normal circumstances because of restraints in terms of space and costs. However, these new findings are still useful as the neural network detected certain areas of the joints that provide the most information about a specific type of arthritis that are known as intra-articular hotspots. In the future, physicians could use these areas as another piece in the diagnostic puzzle to confirm suspected cases. This would save time and effort during the diagnosis and is already in fact possible using ultrasound, for example.

“We are very satisfied with the results of the study as they show that artificial intelligence can help us to classify arthritis more easily, which could lead to quicker and more targeted treatment for patients. However, we are aware of the fact that there are other categories that need to be fed into the network. We are also planning to transfer the AI method to other imaging methods such as ultrasound or MRI, which are more readily available,” explained Lukas Folle from the Chair of Computer Science 5 (Pattern Recognition) at Universitätsklinikum Erlangen.

For the last decade or so, scientists have been making Magnetic Resonance Imaging (MRI) faster using a technique called compressed sensing, which uses the idea that images can be compressed into smaller... Read more