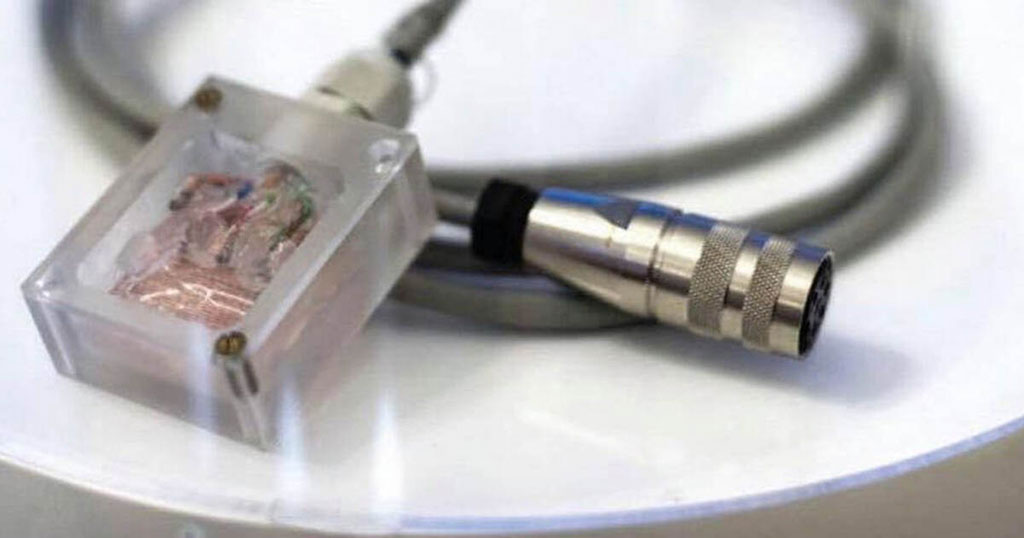 Developed at the Russian Quantum Center (RQC; Moscow, Russia), the Skolkovo Institute of Science and Technology (Skoltech; Moscow, Russia), and other institutions, the new fluxgate MEG sensor is a based on yttrium-iron garnet films (YIGM) that are capable of registering very weak or deep electrical sources in the brain. Owing to its wide dynamic range, the device requires less magnetic shielding, which means a lower cost of both the hardware and the entire research infrastructure.

In a feasibility study, the researchers proved the concept of usage of the YIGM in terms of MEG by registering a simple brain induced field, the human alpha rhythm, which constitutes of sinusoidal electric currents in the back of the brain. The new sensor successfully detected the onset of alpha rhythm, and the result was validated by a highly sensitive optically pumped magnetometer, which currently appears to be well-established in terms of MEG. The study was published on July 30, 2021, in Human Brain Mapping.

“Although our quantum device and the classical flux-gate sensor have similar operating principles, in our case, the quantum exchange interaction helped detect a magnetic field with a magnitude 1,000 times lower compared to conventional solutions,” said study co-author Maxim Ostras, PhD, head of the project at RQC. “Moreover, its high sensitivity coupled with all the advantages of classical flux-gate sensors makes our device a truly universal magnetometer ideally suited for brain research.”

“Even the first prototype of the sensor in some cases showed higher sensitivity in MEG as compared to existing systems, which, combined with its simplicity and solid-state nature, suggests that systems based on this technology have a bright future ahead of them,” said Professor Nikolay Koshev, PhD, of Skoltech. “There is still a lot of work to be done, including further research into the physical properties of the sensor and the development of a new mathematical apparatus that will ensure high-efficiency signal processing for this new specific type of magnetometer.”

MEG is a neuroimaging modality that combines non-invasiveness with high spatial and temporal resolution, which makes it suitable for studying complex functional brain integration processes. The first MEG study in humans was in 1972, when a superconducting quantum interference device (SQUID) was used to register alpha activity. But SQUID-based MEG devices require a cumbersome fixed-size helmet dewar and have high maintenance costs, due to the constant need for sensor cooling with liquid helium.