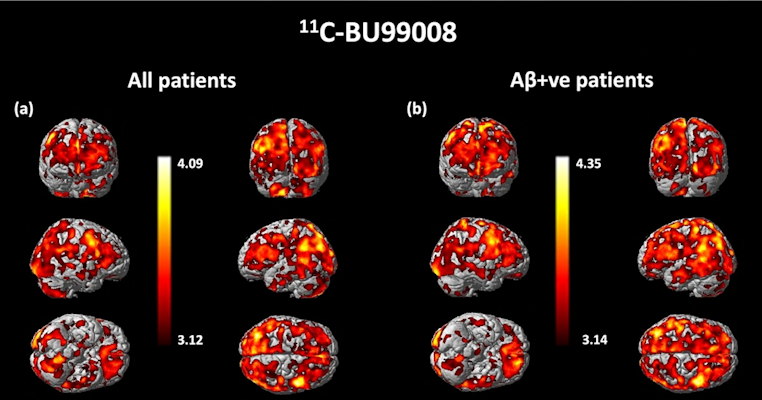 Mapping analysis of significantly increased 11C-BU99008 uptake (Image courtesy of Molecular Psychiatry)
A choline-based positron emission tomography (PET) tracer can be used to identify brain activity involved in the formation of amyloid plaque in people with cognitive impairment and Alzheimer's disease (AD), according to a new study.

The results showed that 11C-BU99008 uptake was higher in eight β-amyloid-positive patients with cognitive impairment across the whole brain, but particularly in frontal, temporal, medial temporal, and occipital lobes, compared with the control group. Biological parametric mapping demonstrated a positive voxel-wise neuroanatomical correlation between 11C-BU99008 and 18F-florbetaben uptake, confirming that 11C-BU99008 could measure astrocyte reactivity. The study was published on July 15, 2021, in Molecular Psychiatry.

Astrocytes have a wide range of roles in the central nervous system, and astrocyte reactivity can increase the expression of inflammatory mediators, reactive oxygen species (ROS), and β-amyloid deposition. In fact, it has been suggested that astrocyte reactivity may be a tissue response to β-amyloid and may have a protective role by phagocytosing and degrading it. Minimally invasive methods for monitoring astrocyte reactivity in patients with late-life cognitive impairment can provide a tool for testing their contributions to disease progression.