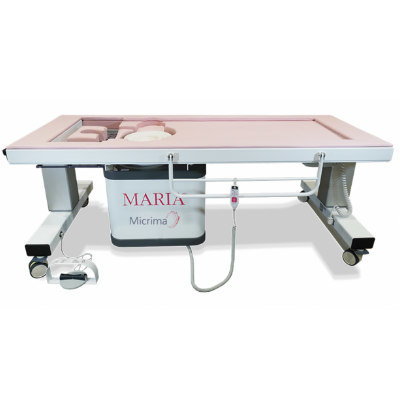 Illustration
The next generation model of a disruptive breast scanning system currently under development promises to transform the landscape of breast cancer detection.

Micrima Limited (Bristol, England) has received funding that will enable the next stage of development and commercialization of its MARIA system, a new breast imaging modality based on radio wave technology. MARIA offers new diagnostic information in dense tissue whilst requiring no breast compression or ionizing radiation exposure to the patient. This makes the system safe and comfortable for the patient and hopefully, an alternative to mammography in the future.

The array consists of 60 radio frequency antennae that surround the breast. They are configured to operate over a wide range of frequencies. Each antenna transmits and the other 59 record the signal back from the breast tissue which allows MARIA to build up a 3D map of tissue variation throughout the breast. The system is measuring signals that travel through the breast, any attenuation in this signal as well as any scatter back of the signal. The scanning process takes less than five minutes. The data is then reconstructed before being presented to the clinician as a 3D volume. In clinical trials to date MARIA has proven to locate regions that correspond to invasive breast cancer as shown by biopsy and histology.

The company now hopes to launch the 7th generation model of the MARIA radio-wave breast scanning system later this year. The latest iteration will still offer a safe system - no ionizing radiation, a comfortable system - no breast compression and a system that in clinical trials in diagnostic clinics has proven effective at accurately identifying cancer. The system has proven to be better than the gold standard in dense tissue. The new model will also offer new functionality in density score as well as improvement in accuracy and ergonomics.

Micrima, which has developed the MARIA imaging system to improve early diagnosis of breast cancer, has reached a significant development milestone with initial sales of its novel breast imaging technology. The company is now set to set to embark on a full commercial launch with distribution already established in Germany, Austria and Switzerland through an agreement with Hologic, Inc.
“This investment will allow us to move the company into the next phase with a system that has a place in a clinical workflow and more exciting functionality to come as soon as clinical data collection can recommence,” said Nick Randall, Chairman of Micrima.

“I first became aware of Micrima some four years ago and it has been really interesting to see them moving forward and overcoming their technical challenges with the development of their latest device,” added Adrian Waller, CEO of Micrima. “This latest round of funding allows us to take the new system and work on automatically classifying findings using the rich data set that it produces, which has every opportunity to transform the landscape of breast cancer detection.”