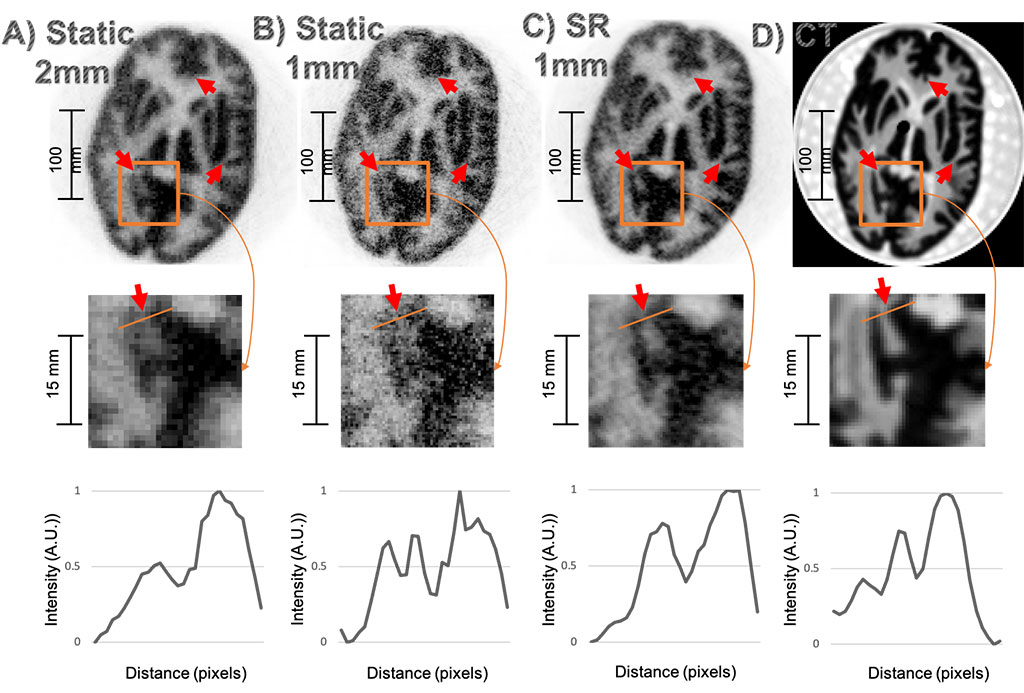 Researchers at Institut Polytechnique de Paris (France), Massachusetts General Hospital (MGH; Boston, USA), and other institutions conducted a study that aimed to use super-resolution (SR) to improve PET image resolution by exploiting spatial sampling information obtained from multiple acquisitions of the same object. To do so, they used the high-resolution infra-red (IR) Polaris Vega tracking camera, which has a tracking accuracy of up to 0.12 mm isotropic and a 60 Hz frame rate.

A transformation linking the Polaris and scanner coordinates space to the same reference object, using squares minimization, was then used to spatially align the two instruments. To enable SR, a PET reconstruction algorithm was developed that incorporated the high-resolution tracking data from the Polaris Vega to correct motion for measured line of responses (LORs) on an event-by-event basis. Simulation models were then conducted using a Hoffman phantom and a rhesus monkey.

The results showed that for both Hoffman phantom and primate studies, SR reconstruction yielded PET images with visibly increased spatial resolution, allowing for improved visualization of small cortical and subcortical brain phantom structures. Overall, the SR method achieved better noise control than the static reconstruction with the same voxel size. For the Hoffman phantom, the SR images showed improved correspondence with the high-resolution CT, compared to conventional methods. The study was presented at the Society of Nuclear Medicine and Molecular Imaging virtual annual meeting, held during June 2021.

“This work shows that one can obtain PET images with a resolution that outperforms the scanner's resolution by making use, counterintuitively perhaps, of usually undesired patient motion,” said Yanis Chemli, MSc, PhD, of the MGH Gordon Center for Medical Imaging. “Our technique not only compensates for the negative effects of head motion on PET image quality, but it also leverages the increased sampling information associated with imaging of moving targets to enhance the effective PET resolution.”

PET is a nuclear medicine imaging technique that produces a 3D image of functional processes in the body. The system detects pairs of gamma rays emitted indirectly by a positron-emitting radionuclide tracer. Tracer concentrations within the body are then constructed in 3D by computer analysis. In more modern PET-CT scanners, 3D imaging is often accomplished with the aid of a CT X-ray scan performed on the patient during the same session, in the same machine.

Global CT Market to Surpass USD 6 Billion by 2025 on Back of AI-Powered Imaging, Says Frost & Sullivan

The global computed tomography (CT) market is expected to register steady growth at a CAGR of 8.1% from USD 4.16 billion in 2020 to USD 6.14 billion by 2025, driven primarily by upgrading of existing scanners... Read more