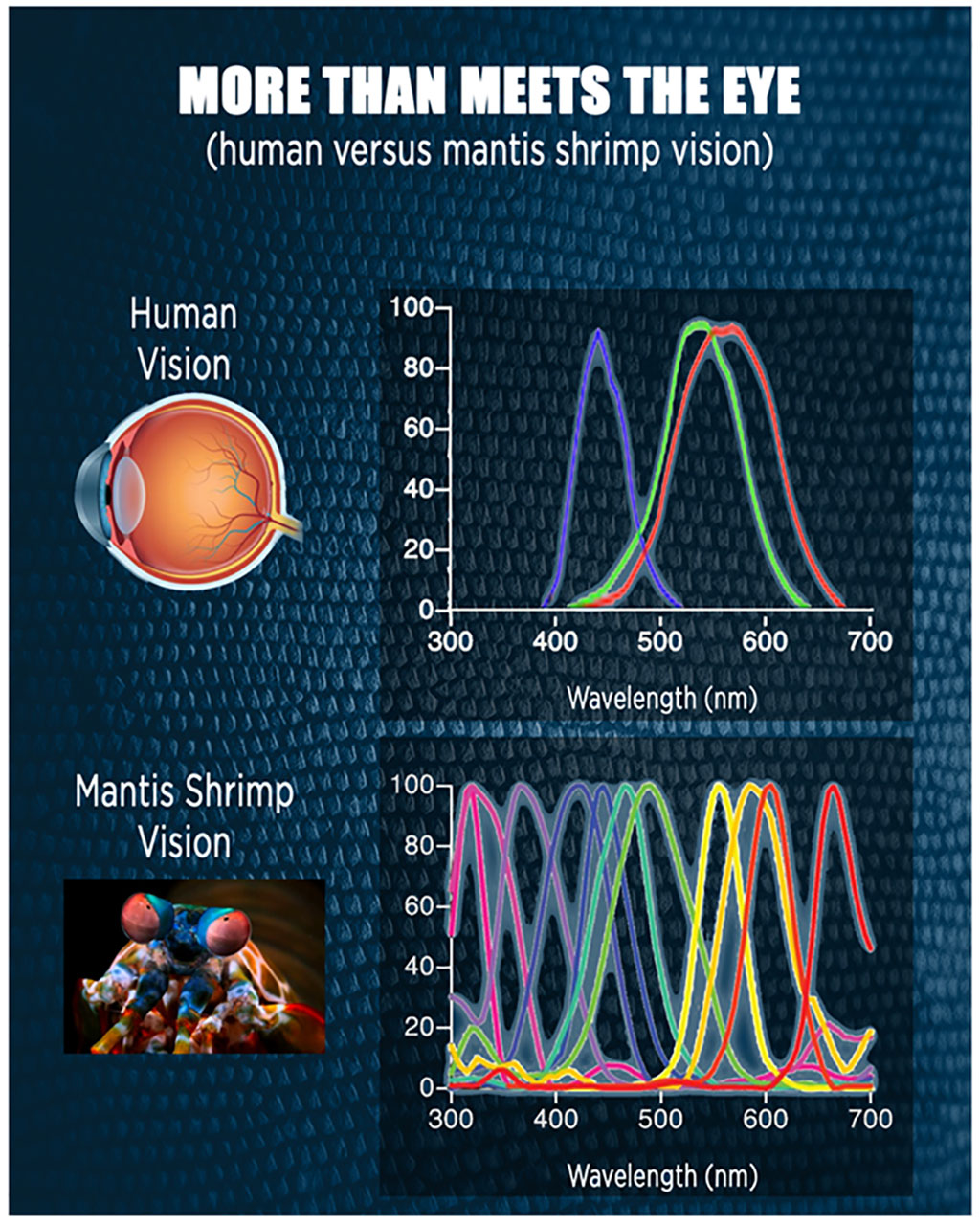 Image: Mantis shrimp can perceive a wider range of colors than humans (Photo courtesy of UIL)
A new intrasurgical camera inspired by the eyes of the Mantis shrimp provides further insights during cancer tumor surgery.

The image sensor enabled simultaneous detection of two tumor-targeted fluorophores in athemic mice, distinguishing diseased from healthy tissue in 92% of cases. It also permitted extraction of NIR structured illumination, enabling the topographical mapping of tumors and surgical sites to within 1.2 mm error. In the operating room, during surgical resection in 18 patients with breast cancer, the sensor enabled sentinel lymph node mapping using clinically approved NIR fluorophores. The study was published on May 5, 2021, in Science Translational Medicine.

“The mantis shrimp has these incredible eyes. Humans perceive three colors – red, green, and blue – because of a single layer of light-sensitive cone cells that line our retina, but the mantis shrimp perceives upward of 12 colors thanks to the stacks of light-sensitive cells at the tip of its eye,” said lead author Steven Blair, MSc, an electrical and computer engineering graduate student at UIL. “The mantis shrimp’s little eyes can thus see things that humans can’t imagine – and do so in a fraction of the space.”

“The combination of this bioinspired camera and emerging tumor-targeted drugs will ensure that surgeons leave no cancer cells behind in the patient’s body,” said Professor Goran Kondov, MD, of UKIM, who demonstrated the technology in the operating room. “This additional set of eyes will help prevent recurrence of the disease, providing patients a quicker and easier path to recovery. And the device can potentially be manufactured at low cost since it is so simple, making it accessible to hospitals around the world. “

Many insects have a pair of compound eyes, such as dragonflies, bees, fruit-flies, grasshoppers, and mantis shrimp, among others. The compound eye of these insects, which is a sophisticated imaging device that consists of a mosaic of tiny optical units called ommatidia, allows them to see a different world from humans. For example, the compound eyes of bees can see ultraviolet (UV) light, making it easier to distinguish whether flowers are rich in nectar. The compound eyes of Mantis shrimp can not only detect multispectral information, but also recognize polarized light.

Global CT Market to Surpass USD 6 Billion by 2025 on Back of AI-Powered Imaging, Says Frost & Sullivan

The global computed tomography (CT) market is expected to register steady growth at a CAGR of 8.1% from USD 4.16 billion in 2020 to USD 6.14 billion by 2025, driven primarily by upgrading of existing scanners... Read more