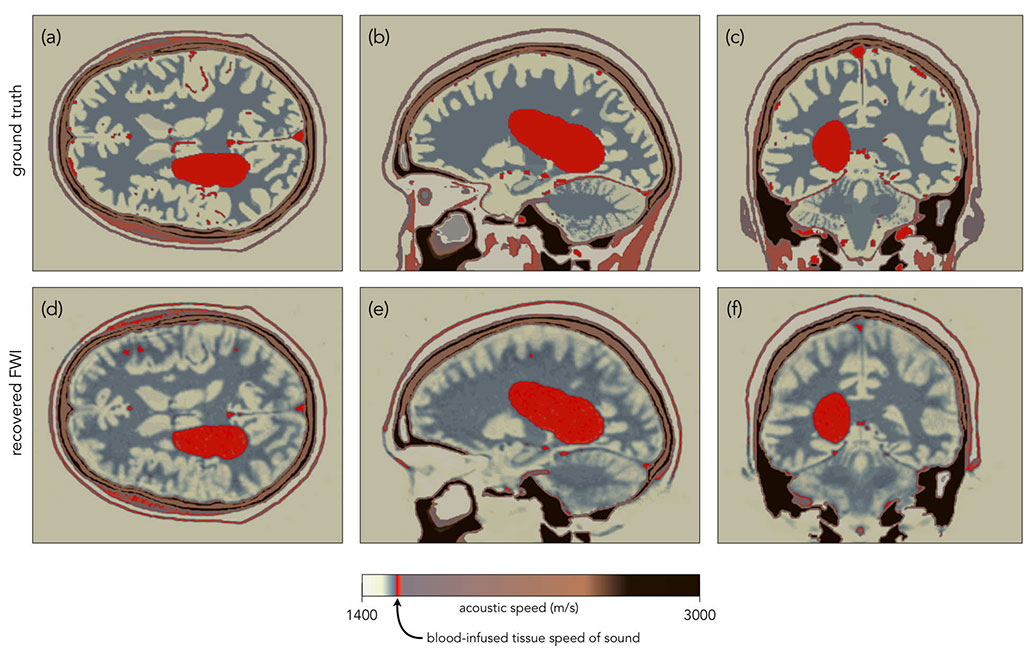 Developed at Imperial College London (Imperial; United Kingdom) and University College London (UCL, United Kingdom), the new imaging system is based on a helmet lined with an array of acoustic transducers, each sending sound waves through the skull. The ultrasound energy that propagates through the cranium is recorded and fed back via the helmet into a computer. FWI is then used to analyze the reverberations of the sound throughout the skull, constructing a three dimensional (3D) image of the interior.

The researchers tested the helmet on a healthy volunteer and found that the quality of the recorded signals was sufficient for the algorithm to generate a detailed image at sub-millimeter resolution. Using computer modelling, they also found they could obtain high-resolution images with sound frequencies low enough to penetrate the skull at safe intensities. Using adaptive waveform inversion, they were also able to create an accurate model of the skull that compensated properly for the wavefront distortion. The study was published on March 6, 2020, in npj Digital Medicine.

“FWI is normally used in geophysics to map the structure of the Earth, but our collaborative, multidisciplinary team of earth scientists, bioengineers and neurologists are using it to create a safe, cheap and portable method of generating 3-D ultrasound images of the human brain,” said lead author Lluís Guasch, PhD, of the Imperial department of earth science and engineering. “An imaging technique that has already revolutionized one field, seismic imaging, now has the potential to revolutionize another, brain imaging.”

“This is a vivid illustration of the remarkable power of advanced computation in medicine. Combining algorithmic innovation with supercomputing could enable us to retrieve high-resolution images of the brain from safe, relatively simple, well-established physics: the transmission of soundwaves through human tissue,” said senior author Professor Parashkev Nachev, PhD, of UCL. “Neurology has been waiting for a new, universally applicable imaging modality for decades: full-waveform inversion could well be the answer.”

The modality with the best spatial resolution and tissue contrast, magnetic resonance imaging (MRI), is contraindicated where the presence of magnetic foreign bodies cannot be excluded, and is impractical with claustrophobic, uncooperative, or severely obese patients. Computed tomography (CT), on the other hand, involves exposure to harmful ionizing radiation. Both require large, expensive, immobile, high-power instruments that are near-impossible to deploy outside specialized environments.