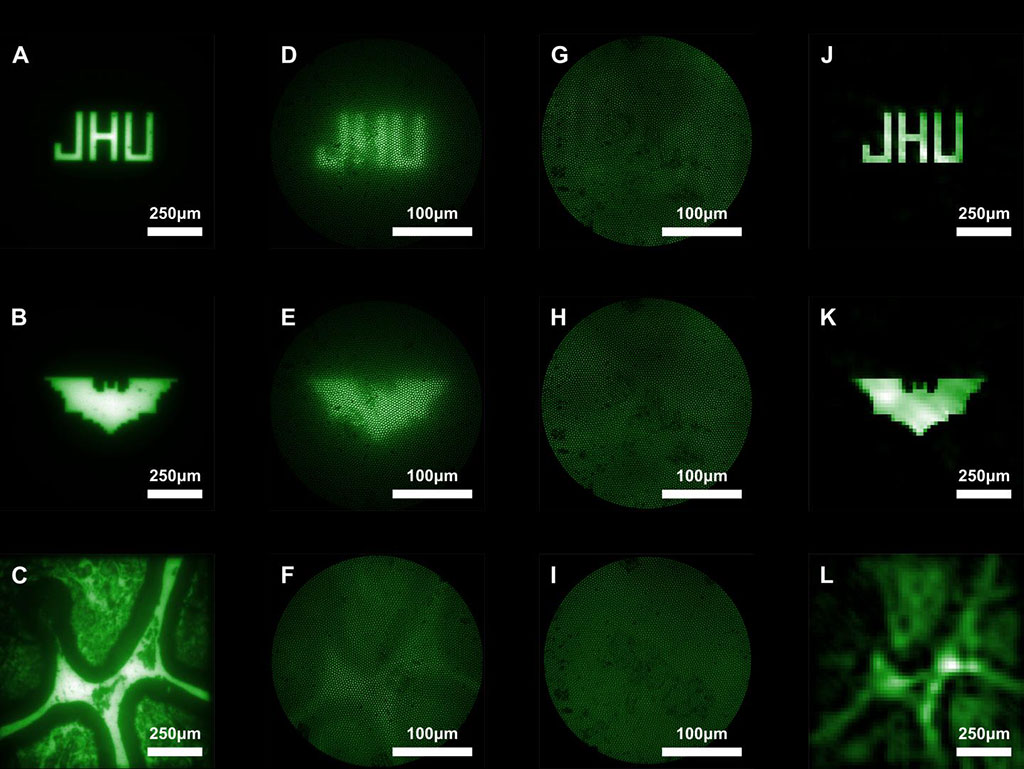 Image: Images captured with conventional miniature endoscopes and the new lensless microendoscope (Photo courtesy of Mark Foster/ JHU)
A new study describes a minimally invasive lens-free microendoscope that computationally reconstructs images that are clearer and of higher quality than conventional lens-based ones.

Under development at Johns Hopkins University (JHU; Baltimore, MD, USA), Harvard University (Cambridge, MA, USA), and other institutions, the new microendoscope uses a multicore fiber to create a distal lens-free system that simultaneously achieves miniaturization and a wide field of view. A coded aperture grid randomly blocks light to create a projection in a known pattern, similar to randomly poking holes in a sheet of paper and letting light shine through them. This creates a muddled image that can provide information on the light’s origin. That information can then be computationally reconstructed into a clearer image.

In additionally, the microendoscope does not require focusing in order observe on objects in different planes; the computational “refocusing” can determine where the light originated from in 3D space. This allows the endoscope to be physically smaller--about the size of a few human hairs in width--than a traditional one that requires a focusing lens. In the future, the researchers will test the microendoscope with fluorescent labeling procedures in which active brain neurons would be tagged and illuminated, to determine how accurately the endoscope can image neural activity. The study was published on December 6, 2019, in Science Advances.

“For thousands of years, the goal has been to make an image as clear as possible. Now, thanks to computational reconstruction, we can purposefully capture something that looks awful and counterintuitively end up with a clearer final image,” said senior author Mark Foster, PhD, of the JHU department of electrical and computer engineering. “Usually, you have to sacrifice either size or image quality. We've been able to achieve both with our microendoscope.”

Lensless cameras based on coded-aperture imaging are designed with flat form factors comparable to those of a bare image sensor with variable working distances. For imaging, an object in the sample plane is illuminated with an incoherent source, and a single snapshot of the scattered light is captured using the camera at the proximal end of the fiber. An image of the scene is then reconstructed using the calibrated system response of individual point sources, the single frame of the object’s system response, and an image reconstruction algorithm.